Anrich Nortje went unsold in the IPL 2020 auction at his base price of INR 50 lakhs. But his fortune has changed after Chris Woakes had pulled out from the tournament and the Delhi Capitals signed him in as a replacement. In 16 matches, the South Africa pacer has claimed 22 wickets and became the second-leading wicket-taker for his team after Kagiso Rabada as well.

However, he had to wait for eight games before playing in IPL 2021. And, he used the chance quite well. On Wednesday, he became the Player of the Match against the Sunrisers Hyderabad at the Dubai International Cricket Stadium as well. He dismissed David Warner and Kedar Jadhav and conceded only 12 runs which came at an economic rate of three. Moreover, Nortje bowled more than 150 km/h on four instances, 151.71 km/h being his highest as well. And, former Indian cricketer Aakash Chopra had wished him with a hilarious message as well.

“Obviously missing out on the first half of the tournament… Personally I wanted to bring the energy. Looking at the first game of the tournament, we decided it was nice to see some grass. Nice to have some sort of assistance, we didn’t have to do too much; just keep it simple. I don’t focus on that [getting the big wickets],” Anrich Nortje was quoted as saying after the game.

“Very happy with this performance. We had a good first phase… Happy to start this way. We want to focus on the process [is what Ponting says]. It was a pretty good bowling… our bowlers did a pretty good job to restrict them. We have one of the quickest bowlers in the world. Pretty happy as the skipper,” Rishabh Pant said.

Shikhar Dhawan said: “I’m enjoying wearing the cap, I’m enjoying the way I’m timing the ball. Not very true, this surface, it stopped a bit, and we had to plan the game according to the wicket. So it was good to go out there and secure a win. I consciously made an effort to increase the tempo and strike-rate, because I wanted to be an impacful player for my side. It was just about the execution. Rabada and Nortje are our gun bowlers. Rabada always gets us the wicket. Nortje has great pace and his game has improved too, so they are troubling the batsmen. Absolutely enjoying being at the top of the table.” 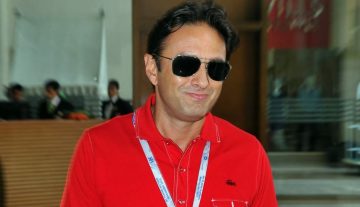