It’s almost impossible to find an apt replacement of the veteran Indian wicketkeeper MS Dhoni as his standards are unmatchable. But, as they say, the comparisons are always made by the fans and it was evident when the crowd started to chant ‘Dhoni Dhoni’, making things worse for the young gloveman, Rishabh Pant who wasn’t having a great day in Mohali. Former Indian opener Aakash Chopra took to Twitter to express his disapproval of the chants and their timing.

Everyone felt Dhoni’s absence behind the stumps in the 4th ODI against Australia, but many have criticized the behavior since it was harsh on Pant. During the match in Mohali, Rishabh was clearly struggling behind the wickets. Pant, who was brought in as the replacement to Dhoni, who has been rested for the fourth and fifth ODIs, struggled with keeping on several occasions during the game and had to face severe criticism for the same.

In the penultimate delivery of the 39th over during Australia’s chase, Peter Handscomb had stepped out to a delivery from chinaman bowler Kuldeep Yadav. Handscomb was clearly ambushed as Yadav delivered a short one and the ball got deflected after hitting Handscomb’s pads.

Dhoni would’ve taken micro-seconds to anticipate the change of line but the 21-year old Pant failed to do the same with such a tricky chance. To cite another major fault, he missed one stumping down the leg side in the 44th over on a clearly wide delivery. Ashton Turner of the BBL fame was way outside the crease but Pant was unable to grab the ball in time, but one has to say that this one was comparatively an easy chance.

It was at that very moment when the crowd at Mohali had started chanting ‘Dhoni Dhoni’ all over. As much as it expressed how much the fans missed the veteran keeper, it was surely humiliating for a young soul like Rishabh Pant. Overall it was a tough day for Rishabh Pant as well as the Indian team at Mohali. Not just the young gloveman, even the other Indian fielders dropped several chances- the likes of Shikhar Dhawan and Kedar Jadhav.

Stop searching Dhoni-the keeper in Rishabh Pant. He’s work in progress. The question should be—Is he worth investing in?
My answer—YES. #IndvAus 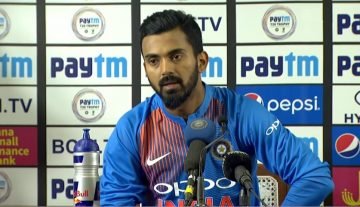 News
By CricShots - Feb 28, 2019
KL Rahul Acknowledges Being Humbler After The Controversy