Australia’s ODI and T20I skipper, Aaron Finch, who is going to self-isolation like most cricketers across the globe due to the on-going coronavirus pandemic, decided to pass his time by having a Q&A session with his followers on Twitter on Friday. While some asked him serious questions like what is his favorite moment as a cricketer, there were others who were just looking to have a little fun.

One user tweeted an image of Bhuvneshwar Kumar bowling from where the umpire was standing to Finch and asked him what he thought while facing that delivery. Replying to the same with an angry emoji, Aaron said, “I had no idea what to do…shouldn’t have pulled away, I got out next ball…last ball of the over”.

I had no idea what to do…shouldn’t have pulled away, I got out next ball…last ball of the over 🤬 https://t.co/bMaHRFSQr4

The delivery in question took place during the third and final ODI of India’s tour of Australia on January 18 last year. Bhuvneshwar had made FInch his bunny in the series and was looking to pile on the misery in the match in Melbourne as well.

ALSO READ: BCCI Recalls The Day Of The First ODI Of Sachin Tendulkar

For the final delivery of the ninth over, Bhuvneshwar bowled a short ball from behind the pitch which left Aaron completely clueless. The umpire ruled the delivery as a dead ball despite protests from the India pacer.

Bowling the final ball of the over again, Bhuvneshwar delivered a beautiful in-swinger that rapped Finch on the pad as he tried to come forward and defend and the umpire had his finger up.

India defeated Australia by seven wickets in the match to sweep the series 2-1. Finch also replied to a fan saying his favorite Indian bowler is Harbhajan Singh, especially in spinning tracks.

Asked how he felt about opening the innings with Sachin Tendulkar at Lord’s for MCC against the Rest of the World, he tweeted “It was like a dream, one of my greatest cricketing memories.”

Finch had scored an unbeaten 181 in that match in 2014. He also cheekily said he was very nervous when he was asked if he was excited about being interviewed by his Royal Challengers Bangalore teammate Yuzvendra Chahal for ‘Chahal TV’. 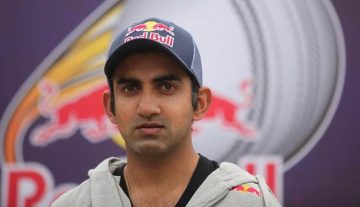 Article
By Shruti - Apr 22, 2019
Gautam Gambhir is not happy with the judging of Ambati Rayudu’s IPL form