There is no denying the fact that Steve Smith is standing at the numero uno position in the ICC Test rankings, however, the top spot keeps changing hands between him and Virat Kohli and the gave rise to the Smith vs Kohli debate in the longest format of the game. Australia limited-overs skipper Aaron Finch was asked about his say on the debate, he termed both the batsmen as “extra-ordinary”, however, picked his teammate as a better Test player.

Giving his opinion on the comparison between Kohli and Smith, Finch said, “In Test cricket, what is unbelievable about them is their records both home and away. Virat had a tough series in England last time with Jimmy Anderson but he came back and dominated. Smith has never really struggled anywhere to be fair. He is an unbelievable Test player. There is one thing to play in your own country but to it everywhere is extraordinary.”

However, Finch kept Kohli above Smith in the ODIs and T20Is and went on to say that the Indian skipper would finish his career as the best ODI batsman of all time.

During a chat with Sports Tak, Finch said, “By the time Virat Kohli finishes his career, he will be the best one-day player of all time, if he is not already. Playing against him is difficult but at times it is also beautiful to watch. It is like playing against anyone who is best of the best, regardless of whether it is Virat or Rohit or Kane Williamson or David Warner.”

He further elaborated, “So, T20, Virat probably has the edge over Steve Smith and it is just because he has played a bit more cricket. You would pick either of them in any of the teams because they get the job done more often and they are bloody good.”

Virat Kohli has scored 70 international hundreds and averages more than 50 in across the formats, whereas, Smith averages higher than Kohli in Tests with 7227 runs in 73 games at 62.74. 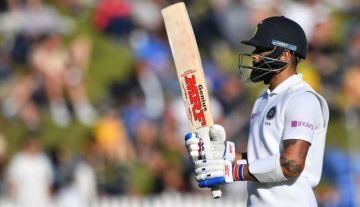