After giving the cricketing fraternity a huge shock after announcing his retirement from international cricket, AB de Villiers has comforted his fans and confirmed that he will continue playing in the Indian Premier League (IPL). At the time of calling it a day, De Villiers had said, “I have no plans to play overseas, in fact, I hope I can continue to be available for the Titans in domestic cricket.”

However, in an interview with iol.co.za, ABD gave the clarification that he will play in the IPL for a few years at least. He said, “I will keep on playing IPL for a few years. But there are no set plans. I haven’t been able to say that for a long time. There are some offers on the table from around the world, but it will be nice to wake up and wonder what to do; to be normal. Bangalore is a special place, a second home, really. I played my 100th Test there, and obviously, RCB is a massive part of my life. India as a country has taken me in, and it’s hard to explain what that feels like. I just play cricket.”

It was widely expected that De Villiers would continue to play till the 2019 World Cup, but he gave an explanation that why he chose not to. He said, “For a long time, the World Cup was a massive goal. But, in the last few years, I have realized that it isn’t realistic to measure yourself purely on what you achieve in that tournament. That will not be the be-all and end-all of my career. Yes, I would have loved to win it, but I have great memories from World Cups. Personally, I scored my first ODI century in that 2007 tournament, and I loved the whole experience of being in the Caribbean.”

South Africa, who were one of the pre-tournament favorites lost the semi-final to co-hosts New Zealand in World Cup 2015. De Villiers, the batting mainstay of the Proteas for a plethora of years announced his exit from the game after starring in Test series wins over India and Australia and said that in hindsight, it was the best farewell possible.

Elaborating the same, ABD said, “It was the best possible way to finish, against two great teams, in the best format of the game. There was a lot of motivation for me to do well, and for the team to do well. Series like that don’t come around too often. I love all the formats, and T20 is a lot of fun. It has brought in a new audience, and it has definitely changed our lives as players financially. But the ultimate format is still Test cricket.” 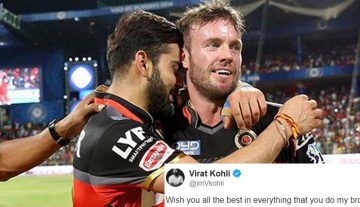