South African batsman AB de Villiers played a brilliant unbeaten 126 runs knock against Australia in their first innings of the second Test at Port Elizabeth. In the tough batting pitch, his knock helped the Proteas team to take a crucial 139 runs lead in the first innings.

In the tough batting pitch, where the other batsmen were struggling, AB de Villiers played a counter-attacking knock through which he completed his century in 117 balls and scored a brilliant 126* runs off 146 balls.

Talking about that innings, Australian assistant coach David Saker commented, “It was one pretty special innings and it seemed like he was batting on a different wicket.”

AB de Villiers is also looking very pleased with playing that important knock for his team. When he was asked about his knock, the right-handed batsman said, “It was ten on ten. It was right up there with the best feeling ever. I was so relieved, I was very nervous in the 90s, I don’t think it showed but I was telling Vern out there that I was struggling to breathe and my legs literally went numb. It’s funny when a guy who has played for 13 or 14 years says that, but it’s true.”

Before this century, de Villiers had scored his last Test century in January 2015. He also mentioned that this knock meant a lot to him. He said, “It really meant a lot to me to get that hundred and I was constantly reminding myself throughout the 90s that it’s not about yourself. It’s about contributing to the team as much as possible, that made me feel a little bit better because the minute you focus too much on individual performance, you sort of forget about the team. But it’s difficult to forget about the team when you haven’t scored a hundred for three years. So it meant a lot to me today.”

While AB is always known as an important cricketer for South Africa, it was looking like that he was detaching from cricket in recent past.

Talking about that, de Villiers said that he never lost his love for cricket but he was tired and had some family responsibilities. He said, “I’ve never lost my love for the game. I was just tired of playing. I was just flat, physically, mentally. Quite a few other factors. I became a dad at the same time, all of a sudden two boys are around and I’ve got a family.”

He further added, “There was just a lot that was going on in my life and I felt like I needed to breathe a little bit. I won’t say I lost my love for the game. I think that showed today. I’ve always loved playing.”

He also mentioned that he was very motivated to prove everyone that he can still play the game.

When de Villiers was asked about what is left for him in the international cricket, he quoted, “It’s very basic. Just to be part of a successful Test team.” 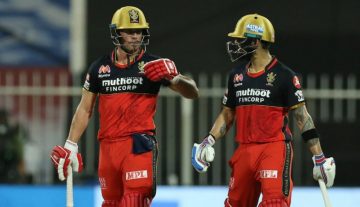 Videos
By CricShots - Nov 18, 2022
AB de Villiers Back RCB To Win Back To Back IPL Trophies