Royal Challengers Bangalore (RCB) veteran, AB de Villiers admitted that the team needs to improve their bowling and fielding as they go forward in the tournament. His comments came after RCB defeated Mumbai Indians (MI) in the Super Over on Monday at the Dubai International Stadium. In the Super Over, MI gave the target of just 7 runs were owing to brilliant bowling by Navdeep Saini, and Virat Kohli and De Villiers chased it down with ease. In the match, both Mumbai and RCB scored 201 runs.

Chasing 202, Mumbai was reeling at 78/4, but Ishan Kishan along with Kieron Pollard made a partnership of 119 runs to take the side closer to the target. Kishan played a knock of 99, studded with two fours and nine sixes. Pollard also played a fiery knock of 60* off just 24 balls with the help of three fours and five sixes.

In a video shared by RCB on twitter, ABD was heard saying, “We were no doubt the best team on the day against Mumbai. We really made it easier for them in the second innings with the ball in hand, there were mistakes on the field and we need to stop them going ahead in the tournament. It was only our third game, maybe I am being too harsh but we need to get things right, we are going to work on our skills in the field, boys showed fantastic character and I am proud of that.”

We witnessed a nerve-wracking rollercoaster game where our players showed tremendous character and put their hand up to deliver at different moments. Let’s hear it from the players and the coaches.#PlayBold #IPL2020 #WeAreChallengers #Dream11IPL pic.twitter.com/sceXkkuuZh

For RCB, Saini finished with figures of 0-43 in his four overs, but he bowled a brilliant super over and he scalped Pollard in it as well. In the match against MI, RCB left out Josh Philippe, and de Villiers was seen standing behind the stumps.

With bat in hand, the Proteas star scored a fiery knock of 55* runs off just 24 balls with the help of 4 fours and 4 sixes to take RCB”s score to 201/3 in the allotted twenty overs.

ALSO READ: AB de Villiers And Navdeep Saini Guides RCB To A Win In A Humdinger

RCB has played three matches in the tournament so far and they have also managed to win a couple. Under the captaincy of Virat Kohli, The Virat Kohli-led side will next take on Rajasthan Royals on October 3. 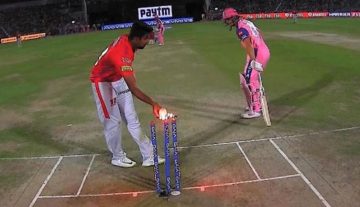 News
By CricShots - Aug 25, 2020
Ashwin Eager For a Conversation With Ricky Ponting Over Mankading