Much like a bowler or a batter, an umpire is also allowed to have a bad day on the field. It was one of those days for match official Virender Sharma, who got as many as three decisions overturned during the eliminator of the IPL 2021 between Kolkata Knight Riders (KKR) and Royal Challengers Bangalore (RCB) in Sharjah on October 11.

Coincidentally, on each of the three occasions, it was Virat Kohli’s RCB who were at the receiving end. Although thanks to the Decision Review System, all the decisions were overturned and had no negative bearing on the course of the game. However, in teh first innings, RCB suffered a loss of two runs on the two wrong umpire calls.

Not known to step back, RCB skipper, Virat Kohli was seen having an argument with umpire Sharma during the 7th over when the latter adjudged KKR batter, Rahul Tripathi, not out on an lbw shout off Yuzvendra Chahal’s bowling. On RCB’s review, the replays showed that the ball had hit the pad first and the ball-tracker revealed that teh ball was thrashing onto the leg-stump.

Meanwhile, in a recent video posted by RCB, AB de Villiers was seen taking a dig at his skipper Kohli’s leg over the entire incident while thanking him for leading the team the way during his captaincy tenure. Notably, Kohli had announced his decision to step down as the RCB skipper upon the conclusion of the current season and his captaincy career came to an end with the four-wicket loss in the Eliminator on October 11.

AB de Villiers said, “The word that comes to mind is grateful [on having Virat Kohli as the captain]. The way you have captained the team has certainly inspired everyone. When it comes to your leadership, you have had a much bigger impact than you will ever understand. There are stories that you don’t ever hear of people’s lives that you have touched, not only on the cricket ground but away from it as well.”

He hilariously said, “That’s much more important than a trophy, which I still believe will come your way. You have done a great job, but that book is not finished yet. Whatever you have done for us, we won’t forget it. Thanks for all the memories, and I think some of the umpires will sleep a bit better, very happy for them.” 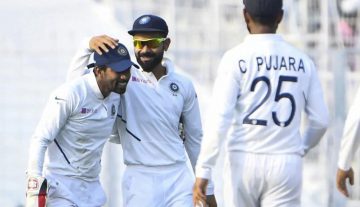