Former Pakistan all-rounder, Abdul Razzaq believes that he wouldn’t have any problems in facing India’s pacer and the number 1 ranked ODI bowler Jasprit Bumrah in his playing days. Bumrah, recently, began his recovery under IPL franchise Delhi Capitals’ trainer Rajnikanth Sivagnanam at the Mumbai Cricket Association. Bumrah got the injury in September and did not play since then. He missed the home series against South Africa and Bangladesh and also not play the upcoming series against West Indies starting December 6. Jasprit Bumrah is expected to return to the Indian team for next year’s tour of New Zealand.

“After having faced world class bowlers in my time, I would have had no problem against a bowler like Bumrah. Pressure would have been on him,” Abdul Razzaq told CricketPakistan. “I have played against great bowlers like Glenn Mcgrath and Wasim Akram, so Bumrah is a baby bowler in front of me and I could have easily dominated and attacked him. Bumrah is doing very well and has improved a lot. He has an awkward action and hits the seam perfectly, which is why he is effective.”

Razzaq also expressed his disappointment about Pakistan’s dismal show in the current times.

“We were struggling to qualify for the World Cup, our Test ranking has gone down and we are lucky to be number one in Twenty20 Internationals. You can’t say we are No 1 because we are really good. Teams like India, England and Australia lost their matches and that helped us in securing the No 1 spot. We desperately need to improve our ranking in other formats and not just focus on player’s individual performances and averages,” Abdul Razzaq concluded.

However, this didn’t go well with the fans and he was badly trolled on social media.

Munaf Patel clean bowled Abdul Razzaq bowling at 116 in 2011'WC.
Same Abdul Razzaq:“Jasprit Bumrah is a baby bowler in front of me. I could have easily dominated & attacked him."
Let that sink in😂 @StarSportsIndia @toisports @FirstpostSports @its_soumalya @BCCI @Jaspritbumrah93 pic.twitter.com/hCEu9ZouIi

#AbdulRazzaq and the rest of the bowlers of your ilk , please get your birth / age certificates in place before challenging @Jaspritbumrah93 😁

After Retirement: “Jasprit Bumrah is a baby bowler in front of me. I could have easily dominated & attacked him."

Dear Abdul Razzaq,
Your batting average is less than 30 in every format of game and you are thinking that You can dominate JASPREET BUMRAH 😂😂😂
Enjoy Retirement.
Don't create problems for your youngster team by such statements#Bumrah #Razzaq 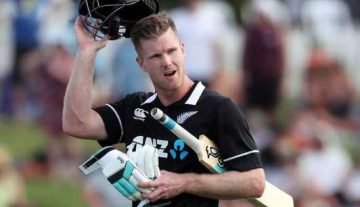 Article
By Shruti - Mar 19, 2019
Jimmy Neesham’s reply made the user delete his tweet