Former Indian skipper, MS Dhoni proved his mettle in the ongoing ODI series against Australia. The wicketkeeper-batsman has hit two consecutive half-centuries in the two games he played and the second of the two went on to win India the game in Adelaide to level the three-game series 1-1. Dhoni also scored a half-century in the first match in Sydney but it was too slow to impress the fans and they thought the veteran’s 96-ball 51 added to the team’s pressure while chasing 289 in the first ODI.

Soon after the demoralizing knock in which India lost the game, Dhoni made a phenomenal comeback with his unbeaten knock of 55 off 54 balls as his team scaled yet another mountain of the run chase. However, the former India skipper found himself in the middle of a unique controversy in the second ODI as well which surfaced after the game that he had not completed a run during the slog overs in the chase in Adelaide. The on-field umpires did not notice it and it is being questioned now whether the short run had an impact on the game’s final result.

WATCH – MS Dhoni’s Half Run Got Unnoticed In Adelaide

Former Australian wicketkeeper Adam Gilchrist opined on the matter after he was asked by a fan on Twitter about it. The incident took place in the 45th over of India’s batting when the visitors still required to score more than a run a ball. The over was bowled by spinner Nathan Lyon and Dhoni nudged the ball on to the leg side to run for a single. However, the veteran cricketer did not complete the run at the non-striker’s end and it later led to an uproar.

Gilchrist has often been compared with Dhoni because of their keeping records which are quite similar and talking about the controversy he said it was just “a unique situation not often seen”.

Thanks for advising. Clearly @msdhoni wasn’t doing anything against the rules. It was just a unique situation not often seen. 👍 https://t.co/fFSehzPQQ8

Gilchrist was present at the venue as the commentator when the incident happened in Adelaide. He was heard saying then: “In Lyon’s last ball of his spell, MS Dhoni chipped him to the onside and straight away said there is no need for any pushing there because I have already hit him for six earlier in the over. Then the over was called and nothing touched the ground there. So this will be interesting with India requiring 25 off 18 and it was in the 45th over, so I wonder if we will hear anything more about that should this go down to the wire.”

However, according to the cricketing rulebooks, since the batsmen didn’t go for a second run, Dhoni’s action came under the category of unintentional short runs. 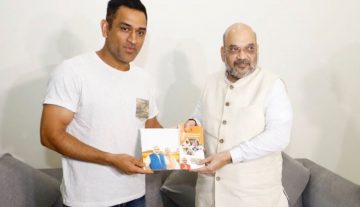