On this day, Australia’s legendary wicket-keeper opening batsman Adam Gilchrist played with a squash ball inside his glove, and singlehandedly propelled Australia to their third straight World Cup Trophy in 2007.

Storming into their 4th consecutive final Australia was all set to defend their title and become the first-ever team to win the World Cup 3 times in a row. However, they faced a tough task ahead of them in a  determined Sri Lankan side in the city of Bridgetown, West Indies. The Australian had a great outing at the 2007 edition of the World Cup so far, The Aussies were unbeaten in the tournament before the finals.

Winning the toss, Australian captain Ricky Ponting opted to bat first at Kensington Oval. The dynamic squash buckling duo of Matthew Hayden and Adam Gilchrist walked out upto the crease with the Sri Lankan pace battery raring to go against them.

With the match reduced to 38 overs, Gilchrist shattered the Sri Lankan attack comprising Chaminda Vaas, Lasith Malinga, and Muttiah Muralitharan. Taking them to the cleaners, Adam Gilchrist wreaked havoc at the biggest stage possible.  Scoring his first 50 runs in 42 balls, the aggressive opener needed only 29 other balls to complete his century.

He did not stop there and kept on thrashing the Sri Lankan attack. He ended up with 149 runs off 104 balls in a knock that included 13 fours and eight sixes. Matthew Hayden and Ricky Ponting also played significant cameos scoring 38 and 37 respectively. Riding on Gilchrist ‘s blasting knock,  Australia posted 281/4 in 38 overs.

Upul Tharanga and Sanath Jayasuriya walked out to open for Sri Lanka. The Lankans suffered an early blow as Bracken got the better of Tharanga in the third over. Joining Sanath Jayasuriya, Kumar Sangakkara ensured to hold the fort as the duo stitched up a century stand. However, the pair departed within a space of 3 overs. Sri Lanka didn’t recover from those quick dismissals.

Bad light stopped play after 33 overs of the Sri Lankan innings and Australia thought they have won the game. However, the match officials ruled three overs could be bowled before declaring the result of the game.

What followed was farcical moments in cricket’s history. The Lankans walked out to bat in near darkness without floodlights. Avoiding the chance of completing their innings on the next morning, Sri Lanka didn’t delay the inevitable. Sri Lanka finished on 215/8 from 33 overs as Australia completed a 53-run win. Australia became the first team to lift the World Cup for the 3rd time in a row. 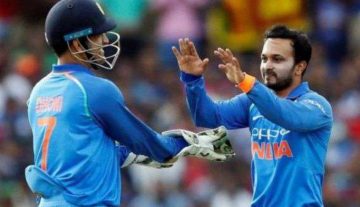