Royal Challengers Bangalore (RCB) managed to reach the playoffs of the ongoing Indian Premier League (IPL) despite suffering four consecutive losses. This is the first time since 2016 that they managed to reach the top four after the league stage and now they will be locking horns with the Sunrisers Hyderabad (SRH) in the eliminator of the tournament on Friday. Ahead of the knockout stage, the franchise organised a party on Wednesday night to also celebrate their skipper Virat Kohli’s 32nd birthday.

The players, along with their families, and the support staff were seen enjoying the part at a private yacht. Also, the cricketers was seen dancing on some popular Bollywood numbers even as the videos of the same were posted on RCB’s official social media handle. Accordingly, the players also clicked a lot of photos with their teammates and posted them on their Twitter handles.

RCB pacer Navdeep Saini also did the same on Friday reminiscing the moments when he enjoyed with his teammates. In the pictures he posted, Australia leg-spinner Adam Zampa can be seen sitting beside Mohammed Siraj and has been captured doing some weird acts. Zampa could be seen very close to Siraj’s ears and it seems he was unaware of the picture was being clicked.

ALSO READ: Jasprit Bumrah Not Bothered About Getting Purple Cap

No wonder the RCB fans noticed it as soon as Saini posted a couple of pictures and they hilariously trolled Adam Zampa for his actions. This isn’t the first time that the leggie is trending on social media. His bromance with Marcus Stoinis is well known to everyone and the duo has been captured together doing weird things hilariously during the matches in dressing room.

Adam Zampa hasn’t played just a couple of games this season so far in the IPL 202 and only managed to pick just one wicket. He has also been expensive conceding 80 runs in the seven he has bowled so far and seems unlikely to feature in a crucial eliminator against SRH on Friday.

RCB had a chance to finish in the top two but they lost four games on the trot to slip to the fourth position. Meanwhile, Zampa is being trolled for his actions and Twitter is having fun over the same.

Please let stoinis back to RCB.. or trade zampa to DC… I can't see his madness. 😂😂😂

Please let stoinis back to RCB.. or trade zampa to DC… I can't see his madness. 😂😂😂 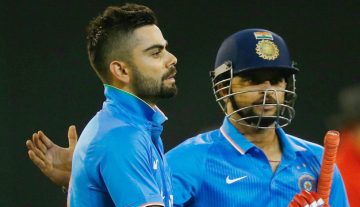