The Royal Challengers Bangalore (RCB) squad will be feeling the huge void of the Aussie seamer, Kane Richardson, who was bought for ₹4 crores in the IPL auction ahead of the 2020 edition. As Richardson made himself unavailable ahead of Indian Premier League (IPL) 2020, two weeks ago, legspinner Adam Zampa was roped-in as his replacement in the RCB squad. Zampa will be joining the RCB squad later this week as currently, he is in England for the ongoing limited-overs series.

During a recent virtual press-conference, Zamps expressed his excitement to join Virat Kohli’s RCB especially since he’ll get to work alongside fellow legspinner Yuzvendra Chahal.

Elaborating the same, Adam Zampa said, “I’ve got a really good opportunity coming up at the IPL where I can bowl with [Yuzvendra] Chahal at RCB [Royal Challengers Bangalore] and I might get the opportunity to bowl those later overs because of the way the team is structured.”

He further added, “I really like working with legspinners so Chahal’s gonna be the one I would really enjoy playing with him. It’s always fun. It’s not only that we have similar traits but also we might learn a lot from each other. Then there’s AB de Villiers and Virat Kohli. Would be fun watching then train and play with them. So, yeah, it’s pretty exciting.”

Explaining the recruitment of Zampa,  RCB’s Director of Cricket, Mike Hesson, said, “When looking at our squad for UAE conditions we felt it was an opportunity to bring in another quality legspinner in Adam Zampa to provide cover for Chahal and also give us extra options if conditions suit spin as expected during the tournament.” 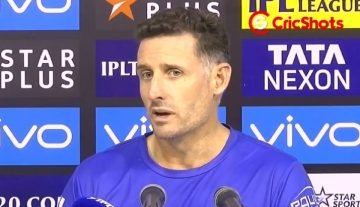