Team India has several amazing characters and Shikhar Dhawan is definitely among the most humorous one. Irrespective of being on or off the field, he always bring smile to everyone’s face. His trademark mustache celebration is second to none.

When off the field, he keeps sharing about his life on the social media and keep the fans engage. Recently, he shared one video with his son Zoravar Dhawan, who was helping his father to grow some hairs. It is noted that since making his debut, Dhawan keeps shaved head and one can only find him in hairs on internet.

The adorable video’s caption reads “A new formula to grow hair discovered by Zoraver, the great. Watch how this miraculous ingredient helps you with your receding hairline!”

A new formula to grow hair discovered by Zoraver, the great. Watch how this miraculous ingredient helps you with your receding hairline! 🙈 बाल बाल बचे। #secret #ingredient #zoraverdhawan #littletroublemaker #nocomplaints

The southpaw is currently playing in New Zealand, where Team India is involved in a five-match One-Day International series. Team has already taken an unsalable lead of 3-0 and now will eye to complete a whitewash.

Dhawan found his form in New Zealand after a rather quiet series in Australia and scored two fifties in first two matches. In the first ODI, he helped India in chasing down a modest target while in the second game; he gave a solid start and shared a hundred run opening stand with Rohit Sharma. However, he failed to convert a good start into a big innings. 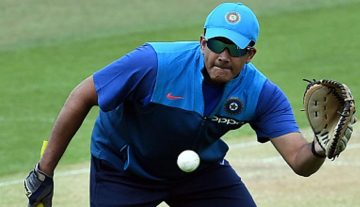