The premier Indian fast bowler, Jasprit Bumrah continued his rhythm from the opening day of the ongoing Test against South Africa in Cape Town on Day 2 as well. He managed to get the wicket of the Proteas opener, Aiden Markram on the second ball itself. Bumrah had earlier got the wicket of Dean Elgar in the dying moments of the first day with an absolute peach.

Jasprit Bumrah was looking like the most dangerous bowler and he began Day 2 on a similar note. After inducing an edge off the first ball, Bumrah got one to tailback in. Markram was unsure if the ball would come in and hence his misjudged the ball and decided to shoulder his arms. The new ball did more than enough to come back in and hit the top of the off stumps to signal the perfect start of the day for the visitors.

Here is the video of the dismissal of Aiden Markram:

While talking about the match, India eventually got bundled out for 223 with Virat Kohli playing a captain’s knock of 79, but he fell short of partners and missed the chance of scoring his 71st century.  Earlier in the day, India captain, Kohli won the toss and opted to bat first. For South Africa, Kagiso Rabada picked up four wickets while Marco Jansen took three wickets, and Duanne Olivier, Lungi Ngidi, and Keshav Maharaj picked up a scalp each.

During the toss, Virat Kohli said they have made a couple of changes as Hanuma Vihari and Mohammed Siraj made way for captain and Umesh Yadav respectively. On the other hand, South African skipper, Dean Elgar said they have made no changes to their playing 11 as compared to the second Test which they win by 7 wickets. South Africa had ended Day 1 at 17/1 and they were trailing behind 206 runs.

Dude!! To think Makram is being out done by a nite watch-man. There is absolutely no reason why we should see that man again in the line-up bcoz wow pic.twitter.com/MknyydrTsh

Me: this Makram guys owes us some runs
Makram: pic.twitter.com/iR0xlDX018

Makram is only good for cover drives on the highlights reel

Need to move on from him

Makram just give it away like elgar did yesterday 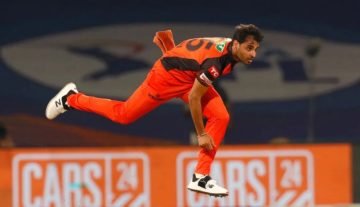 News
By SMCS - May 24, 2022
Bhuvneshwar Kumar opens up on SRH’s defeat against PBKS