South Africa will be missing the services of Aiden Markram for the remaining 2 matches of the 5-match T20I series against India s well. On Wednesday, it was officially confirmed that Markram, who had already missed the first 3 T20Is after being Tested positive for Covid-19, will return back to South Africa.

As per PTI, a cricket South Africa statement read, “Proteas batsman, Aiden Markram, has been ruled out of the remainder of the Proteas’ tour of India. He spent seven days in quarantine after testing positive for COVID-19 last week and will not be able to complete his return to play programme in time to take part in the remainder of the T20 series.”

ALSO READ: Manoj Tiwary Shows A Handmade Note For His Family After his Ton In Ranji Trophy Semi-final

It further added, “The player is healthy and well and has been cleared to return home to look after his mental and emotional wellbeing after isolation in a local facility, as required when an individual tests positive on tour.”

Aiden Markram isn’t the only key Proteas batter who hasn’t been available. The veteran wicket-keeper batter, Quinton de Kock, who missed the second and third game due to a wrist injury, is yet to be declared fit to play.

The statement further said that a decision on wicket-keeper batter Quinton de Kock will be available for selection for the remaining two matches will be made in due course by CSA’s medical team.

Confirming the same, the medical team said, “Wicket-keeper batsman, Quinton de Kock, has made a marked improvement in his recovery from a wrist injury. The Proteas’ medical staff will continue to assess his progress and make a decision on his availability for match four in due course.”

The visitors defeated the hosts in the first couple of matches in an impressive fashion. However, a loss in the third T20I means the series stands at 2-1. A victory in Rajkot will be enough for the Proteas to seal the 5-match series. 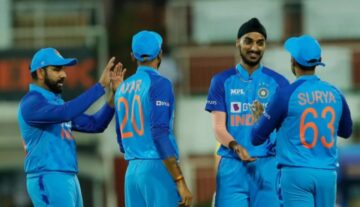 News
By CricShots - Sep 29, 2022
Arshdeep Singh Reveals His Plans Ahead Of The Trivandrum T20