Former cricketer Ajay Jadeja claims that Axar Patel is giving stiff competition to Ravindra Jadeja for a spot in the Indian playing XI in limited-overs cricket and said that both the all-rounders are on par with each other at the moment. Patel has been in incredible form in international cricket and he played a big role in India’s success during the recently-concluded West Indies series where he made some big contributions with the bat.

The 28-year-old started off the Zimbabwe series in fine form, as he scalped three wickets in the opening game. Talking about Patel’s performance as quoted by Hindustan Times, on Sony Six after the first game, Ajay Jadeja said that the left-arm spinner seems to have worked on his batting over the years and has learned to soak up pressure. He feels that this will be good for Indian cricket.

Ajay Jadeja opined, “He has added to the batting so much more in the last few years, you’d think he is quite ahead because he could bat. But with batting, what he did the other day was that he won a game for India. There’s a difference between scoring runs and bailing a team out and taking the game all the way through and winning a game. That adds pressure and it is great for Indian cricket.”

The former Indian cricketer also said that fielding is the only differentiating factor between Patel and Ravindra Jadeja, with the latter being the best Indian fielder. He also went on to say that both the southpaws are on par with each other at the moment.

Ajay Jadeja concluded by saying, “You have got two left-armers who bat left-handed. There’s no competition in the fielding standards, I give Axar credit! The only place where Jadeja is way ahead. Numbers, wickets, and Jadeja has been around a lot more. At the moment, they are on par with each other. The only thing that really differentiates them is the fielding, he has got that little edge and the experience. Axar is on his back and it’s great for Indian cricket.” 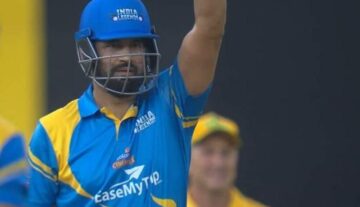 Videos
By CricShots - Sep 30, 2022
Irfan Pathan Takes India Legends To The Final With His Finishing Skills