The Indian deputy skipper, Ajinkya Rahane said that no one likes to warm the benches but it’s on cricketer to visualize things when not being on the field and prepare himself for any possible opportunity. Rahane’s comments come on the eve of the much-anticipated Test between India and New Zealand at Basin Reserve in Wellington.

During a media interaction on Thursday, Rahane said, “It’s important to accept whatever you are going through. Be positive, try and learn as many things as possible from any of the players. You should try and focus on what he can control as a player and keep visualizing that you will get an opportunity. For Rishabh, he bats at No 6 or 7, so keep visualizing about what if he gets an opportunity and what his role is. Keep it simple.”

Rishabh Pant has not played a single match on the ongoing tour of New Zealand. Ever since he suffered a concussion during the first ODI against Australia, he was replaced by KL Rahul who doubled up as wicketkeeper in both the ODI and the T20I series. Even in the dead rubbers, Pant was made to warm the benches.

However, on Thursday, head coach Ravi Shastri was seen having an intense discussion with Rishabh Pant at the nets. There are very slim chances of Pant getting a chance ahead of veteran wicketkeeper-batsman Wriddhiman Saha in the 1st Test, starting Friday. Stressing that Pant needs to focus on the controllable, Rahane said Pant can only improve from here.

Talking about the youngster, Ajinkya said, “See no one likes to sit outside but whatever your team needs on a particular game, you have got to accept that. I think acceptance is really important talking about that particular individual. Focus on controllable, keep working hard and improve as a cricket player.”

Meanwhile, Rahane said he has complete confidence in the young openers Mayank Agarwal and Prithvi Shaw to succeed in tough conditions because of their positive mindset. Prithvi will open alongside Mayank in the absence of Rohit Sharma who was ruled out of the series with a calf injury.

Rahane said, “They both are comparatively young, yes but they both are naturally attacking players. Their attitude is very good in general about cricket. I don’t think they would need much of an advice.” 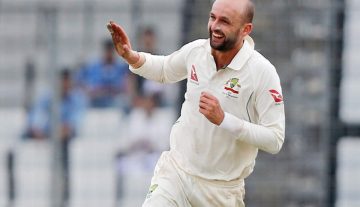 News
By CricShots - Jan 4, 2021
Nathan Lyon Reveals His Plans For Rohit Sharma Ahead Of Sydney Test