After the remarkable series win of the Indian team over Australia at the Gabba in Brisbane, stand-in skipper Ajinkya Rahane on behalf of Team India presented a signed jersey to the opposition off-spinner, Nathan Lyon, to felicitate him on his 100th Test appearance. Lyon entered the list of select-few cricketers to complete a century of Test matches for his country.

Despite the fact that the result didn’t go down Australia’s way as they suffered their first Test loss at the Gabba in 32 years, Lyon certainly bowled his hearts out to deliver a win for his team. Here is the video of Rahane giving the jersey to Lyon:

Cap @ajinkyarahane88 shows amazing gesture towards Nathan Lyon by presenting him a signed t-shirt on behalf of #TeamIndia for his 100th test.
I'm sure the 🐐 gonna remember this series win as 'the real 🐐'.#INDvsAUS pic.twitter.com/1LxIFspExV

Former Indian cricketer, VVS Laxman, who played many special knocks against Australia during his illustrious career, was moved by Rahane and Team India’s “excellent gesture”.

Tweeting about the same, Laxman said, “Excellent gesture from @ajinkyarahane88 and the indian team to Felicitate Nathan Lyon on his 100th Test Match. One more example of Sportsman Spirt from Rahane. How dignified he is even after achieving such a incredible win #Leader #AUSvsIND”.

Excellent gesture from @ajinkyarahane88 and the indian team to Felicitate Nathan Lyon on his 100th Test Match. One more example of Sportsman Spirt from Rahane. How dignified he is even after achieving such a incredible win. #Leader #AUSvsIND

At the post-match conference, Rahane couldn’t manage to find apt words to describe India’s win as he said “don’t know how to describe this victory”. Praising his side, Rahane credited each and every player for putting their hands up and performing for the team.

ALSO READ: Rishabh Pant Terms It As A Dream Series Win In Australia

Ajinkya Rahane said, “It really means a lot to us. I don’t know how to describe this victory. I’m just proud of all the boys, each and every individual. We just wanted to give our best, not to think about the result. When I went in, a conversation between me and Pujara was Puji to bat normal and me to go for my shots because we knew Rishabh and Mayank were there. Credit to Pujara, the way he handled the pressure was magnificent, and Rishabh was brilliant in the end.” 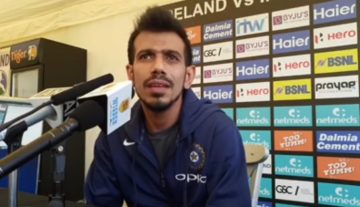 Article
By CricShots - Jun 27, 2018
Yuzvendra Chahal Reveals The Variations In His Googlies