Trinbago Knight Riders’ player, Akeal Hosein took an unbelievable catch on Wednesday in the Caribbean Premier League (CPL) to dismiss Nicholas Pooran off a Ravi Rampaul delivery. Rampaul took a brilliant four-wicket haul during the match against the Guyana Amazon Warriors as the game went to a super over. The scores were tied at 138 at the end of 20 overs.

Nicholas Pooran, who was batting brilliantly on 27 runs from 15 deliveries, was dismissed by Rampaul in the 18th over. While it was not the best of deliveries, but the catch was outstanding. The video of Akeal Hosein taking an outrageous catch can be seen below as the Trinbago Knight Riders player took a full stretch jump to reach the ball with his left hand, just outside the boundary rope.

The video of the spectacular catch to dismiss the Guyana batter in a delivery that appeared destined for the boundary ropes has invited excited reactions from fans. Take a look at what some of them had to say:

This will be remembered for a long long time. What a catch!!!
Akeal Hosein you set up the game for TKR#CPL21 #TKRvGAW https://t.co/YZygLN3WA9

One of the greatest catches ever – Akeal Hosein. pic.twitter.com/zMm4902D21

A catch for ages, Akeal Hosein you beauty#Valimai️ #AjithKumar pic.twitter.com/ZUnest33WU

The Trinbago Knight Riders batted first with Sunil Narine providing them a  decent start. He amassed 21 runs off 20 deliveries before he was dismissed by Mohammed Hafeez. Following the knock from the West Indies allrounder, Colin Munro and Isuru Udana chipped in with scores of 32 (28) and 21 (9) respectively.

A three-wicket haul each from Romario Shepherd and Hafeez helped Guyana to restrict TKR at a score of 138/9 in 20 overs. In response, the Guyana Amazon Warriors got off to an extremely slow start as Chandrapaul Hemraj was dismissed for just six runs from five deliveries, while Mohammed Hafeez was dismissed for 16 runs off 30 deliveries.

Cameos of 27 runs of 29 balls from Shimron Hetmyer, and 27 runs off just 15 deliveries from Nicholas Pooran helped steady the ship for the Guyana Amazon Warriors. Ravi Rampaul’s outstanding spell of 4/29 helped TKR to take the game into the super over with Guyana losing 9 wickets in their quota of 20 overs. 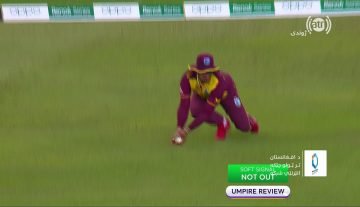