Sarfaraz Ahmed was seen smiling while performing the 12th man duties in the ongoing Test match between England and Pakistan in Manchester. The former Pakistan skipper was seen carrying shoes in the middle after the wicket of his replacement Mohammad Rizwan was dismissed in the 71st over of Pakistan’s 1st innings. Later in the game, the Champions Trophy-winning skipper was also seen carrying drinks for his teammates, who were all over the hosts England by the end of Day 2 at Old Trafford.

However, Shoaib Akhtar said he didn’t like the visuals and according to him, it was a stunt pulled to mock Sarfaraz Ahmed. Shoaib Akhtar in a very clear tone added that a former Pakistan captain can’t be made to carry drinks and shoes. He said, “I didn’t like the visual. You can’t do this to a player who has led Pakistan for four years and has won Champions Trophy for the country. If he has done it himself, then stop him. This shows that Sarfaraz is such a docile and weak man. That’s why Mickey Arthur always dominated him.”

Latif further added, “Senior players like Amir and Wahab who are also sitting out, are not even in their kits. They are wearing tracksuits. This is not team spirit, but this greatness of Sarfaraz because he is passionate about the game. This should not have happened.”

Meanwhile, head coach and chief selector Misbah-ul-Haq asserted that there was no shame in carrying drinks for one’s teammates.

Misbah had said, “This type of discussion can only happen in Pakistan. I also performed the duties of a 12th man, when I was captain and was sitting out in a match against Australia. There is no shame in doing that. Sarfaraz is an excellent human being and player. He knows that it is a team game.” 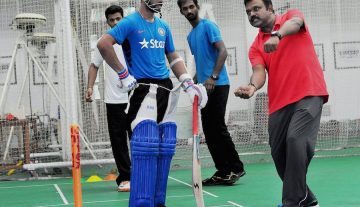