On-field umpire Aleem Dar witnessed a bizarre hit on his leg by Mohammad Wasim Jr’s throw from the square leg during the second ODI between New Zealand and Pakistan at the National Stadium in Karachi. The 54-year-old didn’t keep his eye on the ball and was gutted following the incident.

Aleem Dar was seen in some pain as he threw Pakistan’s jersey on the ground following the incident and soon skipper Babar Azam was spotted having a laugh in the background at Dar’s expense. However, soon after the incident, young fast bowler, Naseem Shah was seen rubbing Dar’s leg to comfort him.

Meanwhile, speaking of the game, after losing Finn Allen’s wicket early on, skipper Kane Williamson along with Devon Conway made a brilliant partnership to help New Zealand manage to reach a score of 261 runs on board. Conway looked absolutely phenomenal as he played a scintillating knock of 101 off 92.

On the other hand, Kane Williamson played another commendable knock of 85 runs before he was dismissed by Mohammad Nawaz, who managed to scalp four wickets for just 38 runs in 10 overs. Meanwhile, Naseem picked up three wickets giving away 58 runs in 8.5 overs.

Overall, it was a solid performance from Pakistan as the New Zealand middle order fell like a house of cards. In the end, all-rounder Mitchell Santner played a valuable knock of 37 off 40, courtesy of which the Kiwis finished on a competitive total. Pakistan, however, would be hoping to chase down the target with ease to win the ODI series. 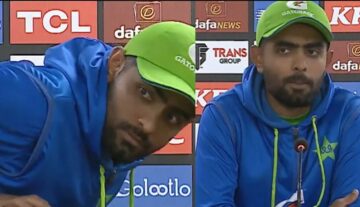 Videos
By CricShots - Dec 31, 2022
Babar Azam Gives A Death Stare To A Reporter After An Inappropriate Question