MS Dhoni is one of the best finishers and also most successful captains in the history of Cricket. Every wicket-keeper batsmen wants to do what MS Dhoni has been doing for the last 15 years. Australia’s wicket-keeper batsman Alex Carey is one of them. Carey also wants to learn how Dhoni finishes the innings for India for so many years. Alex Carey was a part of Australia’s World Cup 2019 squad and he had the highest number of dismissals behind the stumps in the tournament and also scored 375 runs in nine innings at a remarkable average of 62.50 and a strike-rate of over 100.

“I have lots of areas I want to improve on and get better at. I know I will probably bat from the middle to lower order so it’s trying to finish games off for Australia. When you look at the best in the world like Dhoni, you want to learn as much as you can from him. I was lucky enough to play against him last year. Take the game deep and win games-I aspire to do that one day,” Alex Carey told reporters.

“It’s just about improving little parts of my game. Coming back to India you know it is going to be a tough contest. We will probably have lots of spin through the middle and then at the end with world-class bowlers like [Jasprit] Bumrah and [Mohammed] Shami and these guys. It’s just about keeping it simple and playing my role,” said Carey.

Alex Carey only hopes that he earns a place in the T20I side for the upcoming ICC Men’s T20 World Cup later this year in their home.

“When Australian cricket teams are winning, it’s hard to change. For me, it’s to do my absolute best here in the one-day team and hopefully be a part of the T20 World Cup, which is not too far away. I don’t look too far ahead. From my previous experiences with football, you know things can change pretty quickly. It’s [about] focussing on the important stuff and that’s playing good cricket in coloured clothes-hopefully, a series win in India and then go back and play some Big Bash cricket,” he concluded. 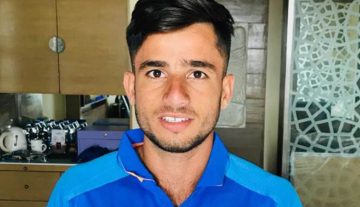