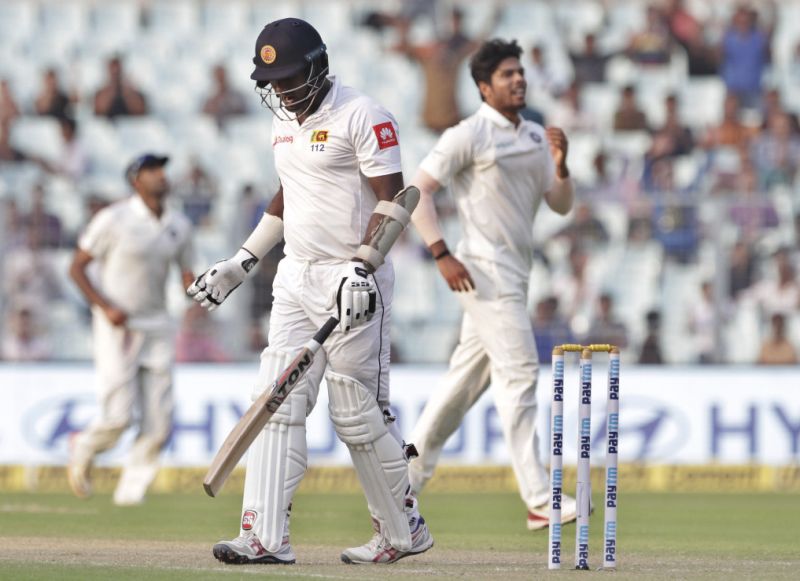 Generally, Indian pitches are known for some ripping turn and uneven bounce from day 3 in Test cricket, but Eden Gardens’ pitch offered something rare during India-Sri Lanka Test. The match saw first two days spoiling by the rain and as many as five sessions got washed out, but we got reasonable amount of cricket in day three.

The consistent rain of Kolkata turned Eden Gardens’ strip into a green top typical England wicket, where Sri Lankan Suranga Lakmal used the conditions most. However, when it comes upon to Indian bowlers, they were not behind anyone and showed their exceptional bowling skills. After India bowled out on 172, Bhuvaneshwar Kumar and Mohammad Shami started the proceedings pretty well and snared Sri Lanka’s two wickets at early stage.

This was Angelo Mathews, who rescued Lankan ship from that storm and shared a crucial 99-run stand with Lahiru Thirimanne for the third wicket. In the process, he notched up a hard-fought fifty against Indian pacers. After the end of day three’s game, Mathews praised Indian fast bowlers and said they are world class bowlers.

“Shami, Bhuvneshwar and Umesh are world class fast bowlers. It was a challenging wicket. All three fast bowlers bowled well. They are very skilful and keep coming at you. You can’t relax. If you see the loose balls, they were very few,” said Mathews.

“We need to be mentally prepared and be ready to score runs off them. I think we can. We have a good batting unit. [Lahiru] Thirimanne fought very hard out there in the middle. Credit to him for the way he played. But 50s won’t take us anywhere. We need to go on and score hundreds on this wicket. Hopefully we can carry forward the work that has been done so far. The top order has done a reasonable job,” he added.

Indian bowlers were a bit of unlucky as few decisions went against them and few edges were put down in the slip cordon. “You are bound to get a good ball every over. As we have seen on this wicket, the liveliness has been there right throughout and it offers a lot for fast bowlers throughout. You have got to forget about the last ball and try and score as many as possible, wait for the loose ball and then score runs.”

After a good start, Mathews and Thirimanne took Sri Lanka to tea without anymore hiccup and they were on top at 113 for 2. But Umesh Yadav removed both set batsmen in two successive overs and fought India back into the contest.

The former skipper missed most of the cricketing action this year with several injuries. Recently, he missed two-match Test series against Pakistan in UAE as well with an injured hamstring. Earlier this year, he missed limited-over series in South Africa before sitting out from Australia T20Is.

“It has been a quite a frustrating year for me with injuries going in and out of the side. It’s not easy you know when you don’t have the same rhythm. I had a good three years of cricket from 2013 onward; I guess my body is taking a toll. I have to manage my workload. It comes with experience as well. I have played a few more games than the rest of the boys,” he concluded.

Indian pacers had a good outing in Kolkata Test, where Bhuvaneshwar Kumar and Umesh Yadav grabbed two wickets each while Mohammad Shami couldn’t taste any success despite being the most consistent. Currently, Sri Lanka is at the top of this game as they are just seven runs behind India’ first innings total and they have six wickets in hand. Skipper Dinesh Chandimal and wicket-keeper Niroshan Dickwella are at the crease.