Former India skipper Anil Kumble is known for his brutally honest views. He was the captain of the Indian team when he visitors registered a Test win in Australia during 2007-08 tour. Also a former India coach, Kumble recently opened up on various issues related to Indian cricket and he opined that the wicket-keeper Rishabh Pant is unsuitable for the No.6 batting position Down Under.

Pant, who made his Test debut in England earlier this year, has scored a couple of 90s batting at No.6 in  India against the Windies while he hit his maiden Test ton at the Oval batting at No.7. However, he has already been touted as the successor of the legendary MS Dhoni, in the long run, had an ordinary series in the limited-over matches of late with formers like Sourav Ganguly questioning his wisdom in shot selection at crucial moments of the game.

Describing the same, in an interview with News18, Kumble said, “No (I don’t see Rishabh Pant as a number 6 in Australia), that’s why I thought when Ashwin moved up the batting order to number six, India should’ve persisted with that. I certainly believe that Ashwin is someone who can contribute at that position, especially when India travel abroad. Even in the last series, Ashwin batted really well, he’s done well overseas. He has the temperament and also the technique. He just needs to be in that position for a longer period of time.”

India will lock horns with Australia for the first Test at Adelaide Oval starting December 6. While experts are seeing this as one of India’s best chances to win a Test series Down Under since the current Australian team will be missing the big guns like Steve Smith and David Warner, but Kumble felt the hosts have some decent batsmen down their order and India would need to be aware of that.

It can be mentioned here that the lower order of England kept on troubling India in the series earlier this year and Virat Kohli’s men eventually lost games despite being an advantage. 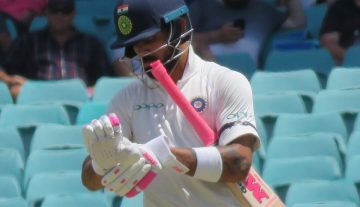