Delhi Capitals (DC) and Rajasthan Royals (RR) locked horns in the 30th match of the ongoing Indian Premier League (IPL) for the second time on Wednesday. After opting to bat first, DC was propelled by half-centuries from Shreyas Iyer and Shikhar Dhawan. They managed to reach a total of 161 runs in their 20 overs. However, for RR, Jos Buttler gave the much-needed impetus, but Anrich Nortje put a stop to it with a fiery delivery that crashed on to the stumps.

With the ball, DC required early wickets to have any chance of defending the total. But Ben Stokes and Buttler got the Royals off to a fiery start. DC skipper Iyer then brought Anrich Nortje into the attack who started delivering fireballs. However, the South Africa pace bowler was taken apart for 14 runs in the first five deliveries. Buttler got stuck into him smashing a six and a couple of fours which also included two lap shots over the fine-leg fielder.

Nortje was also consistent bowling at a fierce pace of more than 150 kph in the over but to no avail. However, he managed to have the last laugh in the intriguing as Nortje ended up castling Buttler off the last ball of his over. It was a 154.8 kph thunderbolt which landed on a fullish length area and jagged back enough to castle the sticks behind the batsman.

Buttler was late to react at the fiery delivery and as a result, Anrich Nortje’s pacy delivery had disturbed the timber to cut short his enterprising knock. The celebration after the dismissal was a pure delight of the fast bowler after watching the stumps fly as Nortje also stared at the batsman walking back. It was a pure battle between the two and it eventually ended with the South African winning it. 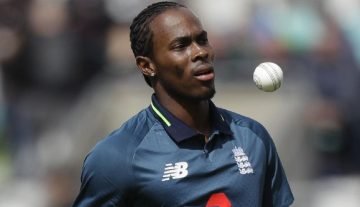