In addition, Elite group had three different groups which were named Group A, Group B and Group C. Group A and B had nine teams each while Group C had the other 10 teams. Plate Group had no sub-group.

There was a very close situation where all the top five teams from Group A were going to qualify for the Quarter-finals while none of Group B would be eligible for that. However, in the end, the top four teams from Group A (Vidarbha, Saurashtra, Karnataka and Gujarat) have qualified for the Quarter-finals along with the only top team of Group B (Kerala).

Also read: Shardul Thakur Is Confident On His Improvement

Bengal and Punjab were both in the Elite Group B and they finished their journey in this tournament after finishing at the third and fourth position respectively in the Group B points table.

Bengal mentor Arun Lal has felt disappointed with the quality of domestic pitches and the formats of latest Ranji Trophy.

Lal said, “This is a six-point-per-game competition and so, some dozen matches have been decided in three days with teams getting out for 35 and 100. They are done and dusted. Evidently because of soil conditions, we can’t prepare rank turners. So, if Bengal take first innings lead against all eight teams, we will still not qualify because you need six points.

“I think within this framework, an outright win should fetch five points, not six and there should be no system of bonus point. Or make it five-day cricket because then the true worth of a team comes out.”

Also read: Hardik Pandya And KL Rahul Are Set To Return To India

On the other hand, the Punjab captain Mandeep Singh has demanded to consider six teams qualify for Quarter-finals from Group A and B combined from the next season.

Mandeep said, “I’ve talked to a lot of senior players. I think six teams should qualify for Group A and B. Maybe they can consider from next season. They can bring two teams from Group C. It’s a tough pool and five teams to qualify makes the task all the more difficult. I seriously believe A and B are very tough groups and six teams should qualify.”

Also read: Virat Kohli Don’t Want To Pick His Bat After His Retirement

However, the BCCI GM (cricket Operations) Saba Karim has defended the tournament format as he feels that it makes the competition more intense.

Karim said, “If you see, there were multiple group league games that were decided in the last round and it made the competition more intense.” 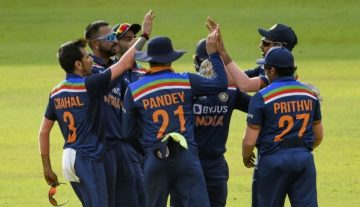