In the recently concluded T20I series against Bangladesh, Afghanistan registered a dominating whitewash of 3-0 against the visitors in the series which was played in Dehradun. However, the excited Afghanistan skipper Asghar Stanikzai cautioned India ahead of the one-off Test at the M.Chinnaswamy Stadium in Bengaluru from June 14.

Newly-promoted Afghanistan will be making their Test debut against India, who are standing at the numero-uno position in the ICC Test rankings. However, the series win against Bangladesh will be a morale booster for the side, despite the fact that the win coming in the shortest format of the game.

After registering a close win by one run in the third and the final T20I in Dehradun against Bangladesh, the excited Afghan skipper said, “Great preparation for the Test match against India – the morale is high. Last couple of years we have performed well. We want to achieve it for Afghanistan. You see the batsmen, bowlers are all in good form.”

The emerging leg-spinner Rashid Khan, the architect of Afghanistan’s 3-0 whitewash of Bangladesh, might well be the spearhead in Bengaluru and he is looking forward to the big occasion. Talking about the same, Rashid said, “Full credit to my fitness – if you’re fit, you can deliver in any department; it doesn’t matter whether I’m playing in league cricket or the national team, I just want to enjoy.”

Rashid finished the series with figures of 11-0-49-8. He was supported capably by the other spinners, Mujeeb Zadran (12-0-60-2) and Mohammad Nabi (12-0-60-4). With a seemingly mysterious googly, Rashid has emerged as the poster boy of leg-spin in international cricket. Amazing numbers of 35 First-Class wickets from 4 matches at a shade over 15 bears testimony to his red-ball bowling.

In Afghanistan’s Test debut, the Indian team will be led by Ajinkya Rahane in the absence of Virat Kohli. Stanikzai is confident that the recent drubbing of Bangladesh has lifted the morale of the side, despite the win coming in the shortest format of the game. 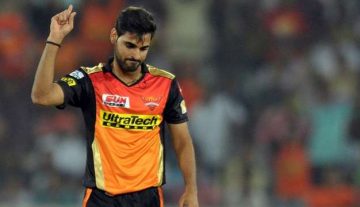