Some more injury concerns for Team India as Ravindra Jadeja and Siddarth Kaul will also be landing in the United Arab Emirates (UAE) on Thursday along with Deepak Chahar to join the Indian ODI squad for the Super Four stage of the 2018 Asia Cup in order to replace the injured pair of Axar Patel and Shardul Thakur.

Left-arm spinner Axar has suffered an injury in his left index finger and pace bowler Shardul has some soreness in his right hip and groin. According to the reports in BCCI.tv, the BCCI was forced to look at replacements on a short notice, and that the decision to replace Axar with Jadeja, who last played an ODI in July 2017 was taken first. After some scans, it has been perceived that Patel had a tendon tear.

The news comes soon after the BCCI confirmed that Hardik Pandya will be flying back home and that Rajasthan fast bowler Deepak Chahar was his replacement. Pandya injured his lower back during India’s win over Pakistan on Wednesday, having to be stretchered off the field.

Jadeja played the fifth and final Test in England recently, taking seven wickets and top-scoring with an unbeaten 86 in India’s first innings. He featured for Saurashtra in their 2018-19 Vijay Hazare Trophy opener against Uttar Pradesh in Delhi on Wednesday, scoring 14 and conceding 62 runs in 10 wicketless overs. Along with Ashwin, he was one the premier spinners of India in ODIs and T20Is before the emergence of the wrist-spinning combination of Yuzvendra Chahal and Kuldeep Yadav last year.

Kaul took 4/55 for Punjab in the Vijay Hazare Trophy on Wednesday, having earlier managed three wickets in four matches for India B in a quadrangular series featuring India A, Australia A and South Africa A. He last played an ODI in England in July when he made his debut. Siddharth was one of several bowlers flown to Dubai last week to help bowl at India’s batsmen in the nets.

India had an incredible start to their campaign as, after an intense game against Hong Kong, the men in blue thumped arch-rivals Pakistan by eight wickets in Dubai. They bundled out the men in green for 162 runs after which Rohit Sharma’s quick-fire half-century helped India chase down the target with 21 overs to spare. Dinesh Karthik, Ambati Rayudu and Shikhar Dhawan contributed their bit as well. 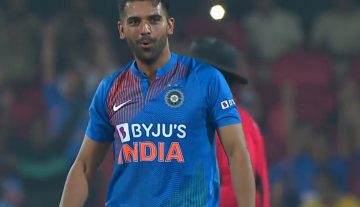