Australia has decided to make two changes to their playing XI for the series-deciding final ODI of the ongoing three-match ODI series India on Friday, with Adam Zampa and Billy Stanlake coming into the side. Stanlake will be replacing his fellow pacer Jason Behrendorff, who has been ruled out with back soreness, while Nathan Lyon has been dropped to make way for Zampa.

Melbourne Renegades fast bowler Kane Richardson has also been called into the squad as cover. Behrendorff, who has a long history of back problems, has not been released back to his KFC BBL side Perth Scorchers along. Apart from him, the all-rounder Mitchell Marsh will also be staying with the ODI squad in Melbourne and will also miss the Scorchers’ clash with Hobart in Perth on Friday night.

Lyon has been dropped just after two matches in the series as he had replaced Zampa in the side for the series opener in Sydney. The pair is expected to be Australia’s frontline spinners at this year’s World Cup and despite going wicketless in the opening two matches, Lyon had earned praise from skipper Aaron Finch.

On Thursday, talking to the reporters, Finch said, “I think he’s been really impressive. Obviously not getting a wicket, he’d have liked a bit more return for that. When he keeps bowling that well, he will get rewarded eventually.”

Behrendorff took a break from his first-class career this summer and eased back to top-level cricket via the limited-overs formats after another crippling back injury.

Earlier, the southpaw pacer said, “It’s something we spoke about at length at the end of last season in particular because I’ve had recurrent (injuries), the same ones over the last couple of years. It’s a decision we didn’t make lightly but something we thought, for the longevity of my career, to give me a bit more time now (to recover) has been really good.”

If the hosts manage to win the game on Friday, they will register their first series win in almost two years having won just four of their last 23 ODIs. They have nmade a plethora of changes in their batting line-up in the series around recalls for Usman Khawaja and Peter Handscomb, Finch said the improvement in his side’s batting has been the major positive of the series so far.

But the skipper also expressed that on Friday night, after losing campaigns against England (twice), India, South Africa, New Zealand and at the Champions Trophy, was his side’s major focus.

Finch explained, “It’s been a while since we’ve won a series. There’s been a lot of improvement and a lot to be proud of so far. But winning the series is the focus.” 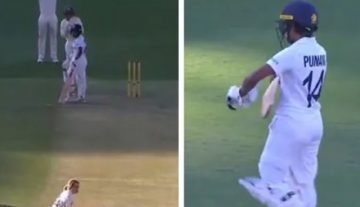