Things seem to keep on going in the opposite direction than what the Australian team and fans would have liked. After their consecutive defeats in the first two matches against England, Australia succumbed to their record heaviest defeat in terms of runs.

When Tim Paine, captain of Australia, won the toss and chose to field, not for even a moment would he have thought that his team would end up conceding the highest total in an ODI match. Australia had brought into the playing eleven Billy Stanlake in place of Kane Richardson. On the other hand, Eoin Morgan was back leading England after he had missed the previous match with a niggle.

Jason Roy and Jonny Bairstow, opening the batting for England, stitched a 159-run opening stand which came to a halt after Roy was run-out in the 20th over. He scored 82 (61) with the help of seven fours and four sixes. Unfortunately for Australia, there was no halt to their woes. Alex Hales came in to bat at No. 3 and shared a 151-run stand for the second wickets alongside Bairstow.

Morgan’s blitz, 67 (30), with the help of three fours and six sixes saw England scoring 481-6 in 50 overs. Andrew Tye, who has a reputation of not giving too many runs, conceded 100 runs in the nine overs that he bowled. All-rounder Marcus Stoinis gave away 85 runs in eight overs.

In the second innings, Australia scored at a decent rate for the first 10 overs. However, once wickets started to fall, their innings fell apart to the extent that they bundled out on 239 in 37 overs. Their batsmen got starts but none of them went on to play an innings which could have brought them close to the English total. Opener Travis Head top-scored with 51 (39) with the help of seven fours. With bowling figures of 10-0-47-4, Adil Rashid was the pick of the English bowlers. 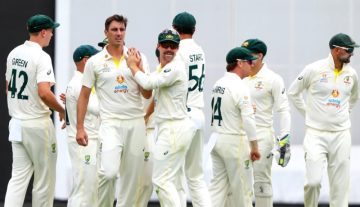