Former Indian skipper MS Dhoni, who is arguably one of the hardest hitters of the cricket ball, is famous in most of the parts of the world. With many foreign commentators going nuts over the reduction of his ability to finish the games, it isn’t common for a player of such standard to have fans of all ages and nationalities. 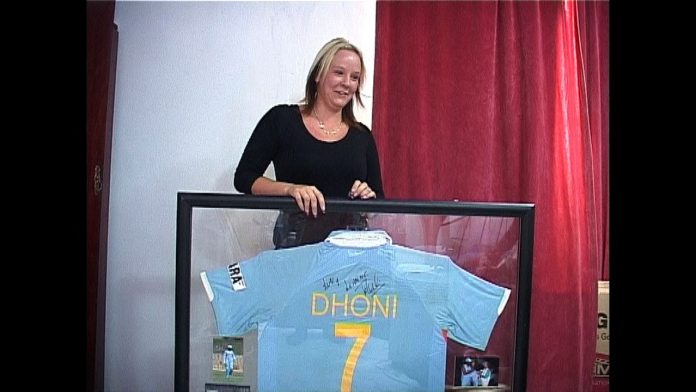 There is an Australian from Adelaide Leanne Blonde, who claims to be the biggest fan of MS Dhoni. At first glimpse, it seems that she is a normal fan like others, but after talking to her one will be able to know that how much big of a Dhoni fan she is.

In the interview, Blonde talks about her love for the former Indian captain and how she followed his career right from his first day. She has even gone to a length of making a documentary on Dhoni’s cricketing career.

Blonde has grabbed each and every opportunity to have a glance of Indian stalwart and has received his autograph on plenty of his jerseys that she has purchased.

It is a great feeling for an Indian to see foreign fans appreciating our Indian players the same way that Indians do and just goes to show that sport is one field that surpasses boundaries. Well, this also proves the great stature of MS Dhoni in world cricket.