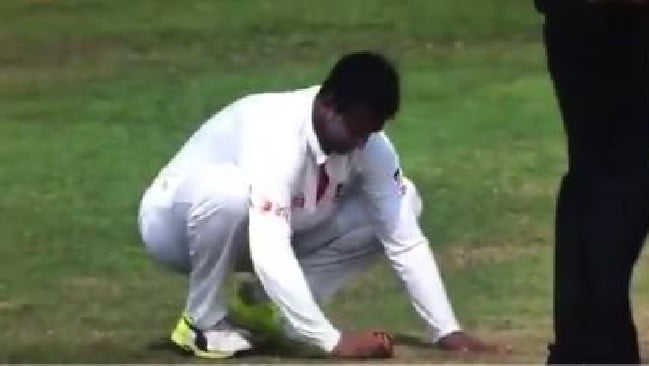 Australia’s tour to Bangladesh has taken a controversial turn, as the media Down Under is questioning if local star Shakib Al Hasan is guilty of ball tampering. Bangladesh

Bangladesh managed to draw the 2-match Test series by 1-1. However, during the second Test at Chittagong, it has been seen that Shakib was tampering the ball.

There has been a video posted on Twitter on the basis of which several Australian websites claiming that the all-rounder was ball tampering as the hosts were running behind in the contest in Chittagong.

This snippet featured in the closer for today's play. Caught my eye. Rubbing the ball on the ground … doesn't seem right #BANvAUS #cricket pic.twitter.com/a2MMo7PCuv

Based on the video posted on social media, News.com.au wrote, “The incident was missed by match officials but it will be interesting to see if the ICC reviews the tape and believes the action constitutes ball tampering.”

They further added, “Further footage would need to be examined to establish any guilt, as these are often contentious debates, but in any case, it was an eye-raising move from Shakib given the extremely strict rules the ICC enforces around tampering the ball. Players are forbidden from changing the state or characteristics of the ball by rubbing or scratching.”