Twitter Reaction
Azam Khan Suffered A Blow On His Head After The Slower Ball From Nuwan Pradeep
By CricShots - Dec 13, 2022 11:25 am
Views 76

Cricket fields often see unfortunate incidents that sometimes even turn horrifying for the cricketers. While standing behind the stumps, Azam Khan was struck on his forehead by Nuwan Pradeep, and it was so terrible for the Pakistani cricketer that the support staff had to stretcher him off the field.

Azam Khan has always been known for his audacious power-hitting ability in limited-overs cricket. The 24-year-old made his international debut in England in 2021 but failed to prove his mettle. He scored six runs in two innings before he was dropped from the national team. Since then, Azam has been continuously playing franchise leagues, such as CPL, T10, and the ongoing Lanka Premier League (LPL) to earn a recall from Pakistan.

However, it took a halt on Monday during LPL’s Match No. 9 between Kandy Falcons and Galle Gladiators, which took place in Pallekele.  During the 16th over of the Falcons’ innings, Azam, the Gladiators’ keeper, faced an unfortunate incident that no one had anticipated to happen.

In that over, Nuwan Pradeep bowled a slower delivery which was going down the leg side, and was bound to be punished. However, Chamika Karunaratne failed to connect the ball, before the wide ball, which bounced once before reaching Azam and knocking him down.

It struck his forehead, and for a while, Azam Khan was seen lying on the ground. A few minutes later, support staff came into the field for the mandatory concussion check, and after watching his pain, carried him off the field. Moeen Khan, Azam’s father as well as the Gladiators’ head coach, came to him to check if he is alright and tapped his son’s leg with a smile on his face, assuming he will recover soon.

Very awkward bounce for Azam Khan. Hit on the head and taken off in a stretcher. Hope he is alright @MAzamKhan45 #AzamKhan #PAKvENG pic.twitter.com/fgFgof88TZ

Here is how the netizens reacted:

The wicket-keeper was taken off the field on a stretcher after being hit on the head while keeping.

wicket-keeper AZAM KHAN was taken off the field on a stretcher after he was hit on the head in the match !!

Galle Gladiators Wicket Keeper Azam Khan is carrying to the Hospital after hitting the ball in his head #sportspavilionlk #LPL2022 pic.twitter.com/4soWc7R376 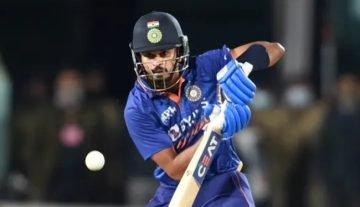 News
By CricShots - Jan 17, 2023
Shreyas Iyer Ruled Out Of The ODI Series Against New Zealand