Pakistan skipper, Babar Azam has made a big statement before the high voltage match against India in T20 World Cup 2021 on Sunday. He had said that his team has so much power that this time they can beat India. Babar Azam is planning to outplay India, but he failed to tackle the wrath of the South African fast bowler. During the warm-up match in Abu Dhabi, Rabada bowled a brilliant yorker and sent Babar Azam to the dugout.

Kagiso Rabada was bowling the fourth over of Pakistan’s innings. On the fifth ball, he bowled a pin-point yorker to Babar Azam. The video of the dismissal went viral on social media and Babar’s shot looked similar to a viral video from teh past of him batting in a house, where he aced the shot.

However, this time, Babar Azam could not sense the length of the ball and by the time he went to put his bat on the ball, the ball had hit the stumps. Babar Azam returned to the dugout in despair. The Pakistan captain scored 15 runs in 12 balls with the help of two fours.

Here is the  video of the dismissal:

However, Pakistan did not regret the early fall of the captain’s wicket and reached a huge score of 187 runs against the Proteas. Babar Azam failed to do much, but Fakhar Zaman (52 retired) played brilliant innings. The left-handed batsman scored a half-century in just 28 balls with the help of two fours and five sixes. Shoaib Malik (28) and Asif Ali (32) also made useful contributions.

Pakistan captain Babar Azam has said that he is confident that this time his team will be able to beat India. In such a situation, the focus of the Pakistani team is on the upcoming match instead of the result of the previous matches.

Babar Azam had said in the virtual press conference, “The first match is always of high intensity. We want to take the momentum forward by winning it. We are not thinking about what has passed behind, but about those who are going ahead. I am sure we are preparing for that match and will play good cricket on that day. There is no special planning of his team regarding the match against India.” 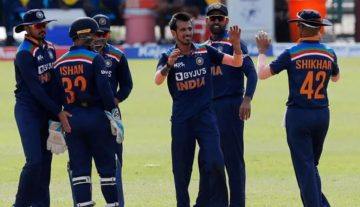