Earlier in the game, the Australian skipper, Aaron Finch won the toss and decided to bowl first. Scoring at the run rate of 9.33, Pakistan openers smashed 56 runs in the first six overs. This is the most runs scored by Pakistan in the initial six overs of a T20I contest against Australia. Rizwan got out after scoring 23 whereas Babar went on to score a fifty.

The record-breaking start owes to explosive batting by the skipper Babar Azam as he smacked 38 runs off only 25 balls. He was assisted by Muhammad Rizwan’s 17 runs off 11 balls. However, in the 6th over of the match, Babar Azam pulled off the shot of the day. Ben Dwarshuis was bowling the over and Babar smashed an inside-out drive over the top, and the timing carries it 82m for six.

Here is the video of the shot from Babar Azam: 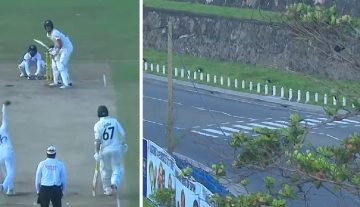