Pakistan skipper Babar Azam has often been considered as one of the top batters in modern-day cricket. However, on Wednesday, during the final day of the second Test against Bangladesh, he made the headlines for his off-spin bowling. Azam on Tuesday bowled his first international over during the fourth day of the Dhaka Test.

Babar Azam conceded just run in his first over and also came close to picking his first wicket when the fifth ball of his over got the outside edge of Taijul Islam’s bat. But it did not carry to the fielder and Islam was saved. After successfully completing his first over in world cricket, a confident Azam returned on the final day of teh game and this time he managed to scalp his first international wicket.

Azam got the wicket of Mehidy Hasan, who scored 14 runs off 70 balls. The incident took place in 76th over of Bangladesh’s second innings. Azam trapped Hasan in front of the wicket on the second ball of his over when the Bangladesh batting all-rounder tried to sweep him but failed to execute the shot.

Pakistan fielders appealed for the wicket after the ball hit on Hasan’s bat. But the on-field umpire was not convinced and decided against it. Azam instantly went for the DRS call and he was successful as the ball-tracking device showed that the ball would have gone to hit the stumps.

Following the review, the on-field umpire was forced to change his decision to out as Pakistan players celebrated their skipper’s maiden international wicket. With his maiden wicket, Babar Azam also ended Hasan and Shakib Al Hasan’s slog over partnership of 51 runs for the seventh wickets.

In the next over, Sajid Khan, who finished with 12 wickets to his name from both innings combined, removed set batsman Shakib Al Hasan (63) from the attack to put his visitors on top. In the end, Pakistan managed to bundle out Bangladesh for 205 runs to take the match by an innings and eight runs. 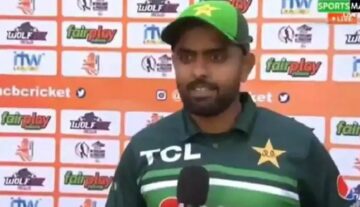 News
By SMCS - Jan 9, 2023
WATCH: Babar Azam gives a sharp reply to ‘do you think you should leave Test captaincy’ question