Following his memorable match-winning performance against Pakistan in the third ODI, England opener Jonny Bairstow revealed that playing alongside his David Warner during the Indian Premier League (IPL) has helped him to improve his game. Bairstow was an absolute revelation for Sunrisers Hyderabad (SRH) as he and Warner formed a deadly partnership at the top of the order.

Shifting from IPL to international cricket has been quite easy for Bairstow as he blew away Pakistan in the third ODI. Many would have expected a tight contest after Pakistan ended up scoring a mammoth 358 for 9 in their allotted 50 overs. However, the hosts dominated the chase as Bairstow led the charge with a whirlwind century.

Bairstow scored a mind-boggling knock of 128 off 93 as England bulldozed Pakistan by six wickets to go two-nil up in the five-match series with two more to play. There were also notable contributions from Jason Roy (76 ), Joe Root (43) and an unbeaten 46 by Moeen Ali. The chase was also England’s second-highest run-chase in ODIs and best at home as they chased down the target with more than five overs to spare.

Following the game, Bairstow spoke about the importance of spending time with Warner in the IPL. He said, “You’re able to learn different things from different coaches and different players. It’s just little things like game plans. He (Warner) hits in completely different areas to potentially myself. I guess it’s method more than anything else. But learning from them, as well as the guys here, that can only be a good thing playing under pressure with expectation.”

ALSO READ: Shreyas Iyer Will Be Captaining India A Against Windies A

Describing the same, the wicket-keeper batsman said, “I was cross because you want to see that through. You want to be going on and getting 160 or 170, and potentially 200 and seeing your team through. That’s where we’re at as a group of players at the moment, having a competition to go and get the 150s and 160s and beyond. We are backing ourselves and competition is healthy all the way through. That’s a good place to be and I was cross about it.” 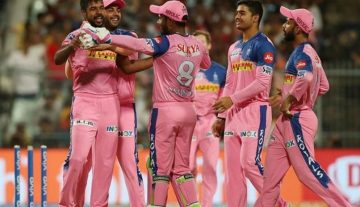