The premier English all-rounder, Ben Stokes showered praises on his teammate Jos Buttler, saying the destructive wicket-keeper batsman is one of the most versatile in limited-overs cricket in the world at the moment. Buttler has scored runs at an average of 41 in ODIs with nine centuries and 20 half-centuries under his belt. However, his strike-rate of close to 120 in ODI cricket makes him one of the most explosive batsmen in limited-overs cricket.

During a podcast with Rajasthan Royals spin consultant Ish Sodhi, Ben said, “For me, he is one of the most versatile and best ODI players in the world right now. You know he can destroy you; he can hit you 360 but he can also play innings like that in the World Cup final. To have that skill set as an ODI player is an absolute nightmare for an opposition captain or bowler.”

England won the World Cup for the first time in 2019 by beating New Zealand on boundaries after a tied Super Over amidst a nail-biting finish. Chasing 242 for victory, Stokes’ scintillating unbeaten 84 helped the hosts tie the most interesting final, forcing the Super Over where more drama unfolded.

Buttler and Stokes took 15 runs off Trent Boult’s Super Over without losing their wickets.

Talking about the fitness level of English players, Stokes said, “Watching someone like Jos put in an extra 45 minutes to an hour on his fitness, that was what drove me to have a rethink to ‘I feel I can do more here’. Slowly I started operating in that mode of ‘right I can do my skills-based stuff, let’s do some sprints, let’s go for a run’, and then it led into something bigger and better. It then just got around the whole team with new guys coming in and just thinking that’s how everyone operates.”

Stokes, who plays for Rajasthan Royals in the Indian Premier League (IPL), also spoke about fielding, saying you cannot switch off at all on the field in T20 cricket.

The all-rounder explained, “You can afford to switch off every now and again in a Test match or a One-Day game but in a T20 game you can’t. As you’ll know from the last two years at Rajasthan I was massive on making sure everyone was putting in the effort to make their fielding better. The competitiveness is I think what brings the best out of everybody, you put a bit of competition on it, you know nobody wants to lose even though it’s a fielding drill and it’s at training.” 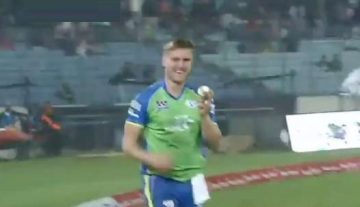