Umpiring howler can often be seen in cricket – be it a domestic league or international. However, recently, during the County Division 1 game between Kent and Hampshire has seen an incident like this that left the English cricket fraternity in disbelief too. Kent batter Jordan Cox has become a victim of one such umpiring howler on the final afternoon of the match played at the St Lawrence Ground in Canterbury. However, the batter was given out despite the ball missing his bat by a fair distance.

It was the 80th over of Kent’s second innings and Jordan Cox was batting on 64. Off-spinner Felix Organ bowled a full-length delivery outside the off-stump which the batter tried to play with his front foot. The ball hit his pads and went to short-leg fielder Joe Weatherley who grabbed an easy catch. And, then the on-field umpire gave him out, as he felt the ball has somehow made contact with the bat.

You're the umpire. Are you giving this out? 👀#LVCountyChamp pic.twitter.com/ec4fwFJOAS

However, the video went viral in no time as players, fans couldn’t believe it was a dismissal. Several members of the cricket fraternity also opined on social media about this. “What…….how Nope,” tweeted veteran England all-rounder Ben Stokes, who was in shock as well as disbelief over the decision. Meanwhile, Graeme Swann, Liam Livingstone and Sam Billings are among the other players who have reacted to it as well.

Here is how Twitter reacted to the umpiring howler:

HOW IS THIS OUT? IMPACT IS OUTSIDE https://t.co/m764xabtLo

This is how Simon Harmer took 700 FC wickets. https://t.co/PtRglwJqU1

If that had brushed the bat then the catcher at short leg would've been appealing too. Weatherley just lies there. He knows.

No way the bat is anywhere near it. Lbw as no shot played?

Look again. Looks like it may have hit the back of the bat. Not LBW as the ball would have missed a second set of stumps. 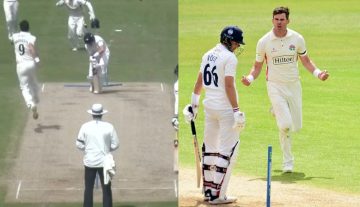 Videos
By CricShots - May 15, 2022
James Anderson Cleaned Up Joe Root With A Peach In A County Match