In the latest episode of the infamous chat show Koffee With Karan, the young stars Rajkumar Rao came and Bhumi Pednekar came as the guests. However, the show, the actress expressed her desire of dating the Indian skipper Virat Kohli who also happens to be the husband of the famous Bollywood actress Anushka Sharma. Both stars in the show told the host Karan Johar about his own crush and date and made disclosures some interesting stuff about their personal life.

During the rapid fire round of the show, Karan asked Rajkumar if he was not dating the letter, who would have liked to go on a date? replying to it, Rajkumar took the name of Deepika Padukone. After his reply, Bhumi laughed and said she would’ve like to date Anushka Sharma’s husband (Virat Kohli). He told that he wants to steal Kohli from Anushka.

ALSO READ: Virat And Anushka Gets To Meet Roger Federer at the Australian Open

After this, when Karan Johar asked the actress if she gets an opportunity, you would like to date which actress’s friend or boyfriend. Actress said, “I would like to date Priyanka Chopra’s husband Nick Jonas, who is really fantastic, I grew up listening to his songs, he is very cute.

The show became very popular in the cricketing fraternity recently as a controversy took a rise when the young players Hardik Pandey and KL Rahul came to the show. During the show, both of them were seen saying some ‘sexist’ and ‘misogynistic’ comments about the women. As an aftermath of that, the BCCI put a ban on the players.

After the controversy, Karan Johar had also apologized to both the players. However, last week the ban has been provisionally been lifted as Hardik also played the third ODI against New Zealand on Monday, while Rahul turned to India ‘A’ against England Lions. 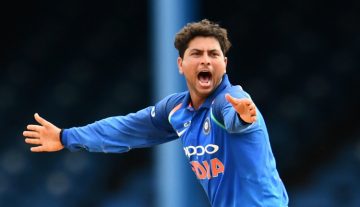