On Monday, the Selection Committee had a meeting with the Indian skipper, Virat Kohli in the presence of the BCCI president, Sourav Ganguly, in order to pick the squads for the upcoming tour against West Indies. As per the expectation, the veteran Indian seamer, Bhuvneshwar Kumar and Mohammed Shami has made a comeback in the Indian T20I squad.

Virat Kohli has returned as captain of the Indian team for the West Indies tour which is scheduled to commence on December 7 and both teams will be playing three T2-Is and as many ODIs. The in-form fast bowler, Mohammed Shami has alsmot

Considering the Indian team’s New Zealand tour early next year, there were talks that the selection committee would allow Rohit Sharma to rest for the tour of the West Indies. It was also reported that Shikhar Dhawan, who lost his batting form in the last few matches, is also expected to drop. But the selection committee has decided to give Shikhar Dhawan another chance.

Rohit has also been available for the series with Bhubaneswar Kumar, who has been out of the team for the past few months due to injury, has also been included in the squad. Also, Krunal Pandya has been dropped and he has been replaced by the veteran all-rounder Ravindra Jadeja.

ALSO READ: Virat Kohli Will Play Day-night Test In Australia On One Condition

Meanwhile, Sanju Samson has been dropped from the T20I squad after not even making an appearance in the recently concluded T20I series against Bangladesh. Whereas Khaleel Ahmed has been dropped from the side after having a torrid outing against Bangladesh. Interestingly, Kedar Jadav has made a comeback in the ODI squad and Kuldeep Yadav has replaced Rahul Chahar in the T20I squad.

India squad for the T20I series against West Indies:

India squad for the ODI series against West Indies: 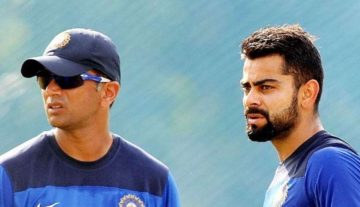