The fiery New Zealand pacer Trent Boult has surged in the International Cricket Council (ICC) Men’s ODI Player Rankings after finishing with a total of 12 wickets in the five-match series against India, which concluded in Wellington on Sunday with a 4-1 victory for the visiting side.

The 29-year-old left-arm fast bowler, who got to move the ball prodigiously to claim five for 21 and guided New Zealand to an eight-wicket win in the fourth ODI, has moved up seven places to grab the third position in the bowlers’ rankings. He was at the numero uno position in January 2016, and is again on his way up, with only India fast bowler Jasprit Bumrah and Afghanistan leg-spinner Rashid Khan ahead of him.

The young Indian leg-spinner Yuzvendra Chahal (jump of one place to fifth) and fast bowler Bhuvneshwar Kumar (jump of six places to 17th) are among others to move up in the latest rankings update, which also takes into account India’s preceding three-match series against Australia and the five-match ODI series between South Africa and Pakistan.

In the ICC rankings for ODI batsmen, former India skipper MS Dhoni has climbed up three places to grab 17th position during a run, which includes three consecutive fifties for a player of the series award against Australia. Kedar Jadhav has taken a leap of 35th position to reach 35th position and he is another one to advance for India in the list led by the Indian skipper Virat Kohli.

For South Africa, Quinton de Kock (jump of one place to eighth), Hashim Amla (jump  of three places to 13th) and Reeza Hendricks (up 36 places to 94th) have moved up among batsmen while Andile Phehlukwayo’s eight wickets have seen him gain 13 places and reach 19th position and Dwaine Pretorius has moved up from 53rd to 44th slot.

WATCH – Yuzvendra Chahal Asks Rohit Sharma To Make Him Bat At No.3

Pakistan’s fighting effort in South Africa was thanks largely to Player of the Series Imam-ul-Haq and he has taken a jump of nine positions to reach his career-best 16th position with 271 runs at the top of the order. Shaheen Afridi, who came into prominence in last year’s ICC U-19 Cricket World Cup in New Zealand, is also among those to benefit. He has moved up 38 slots to 74th position after taking six wickets in the series.

Other batsmen to move up in the latest rankings include the Australia duo of Glenn Maxwell (up two places to 30th) and Shaun Marsh (up from 60th to 43rd). 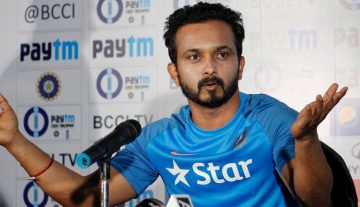 News
By Sandy - Jan 26, 2019
Kedar Jadhav: Good Thing For Any Team That More Guys Are Competing For One Spot