Former Australia spinner turned cricket analyst Brad Hogg has said that Team India opener Prithvi Shaw has improved a lot in recent times since his struggles in Australia. And, as per him, he wouldn’t be surprised if Shaw gets a place in India’s squad for the upcoming T20 World Cup later this year.

Prithvi Shaw faced a rough patch during India’s Test series against Australia later last year. But, he worked on his batting and returned with a bang in the domestic season. He amassed a record 827 runs in the Vijay Hazare Trophy this season and then 308 runs in eight games in the first half of IPL 2021 which came at a strike rate of 166.48 as well. Later, Shaw smashed 43 in 24 balls in India’s successful 263-run chase in the first ODI against Sri Lanka on Sunday (July 18) as well.

While speaking on his official YouTube channel, Brad Hogg praised Prithvi Shaw for working hard on his loopholes and coming back stronger. He said: “He (Shaw) has improved his technique since Australia. He was a little loose outside the off stump there. He has worked hard and has got a straighter bat swing now. Yesterday, (in the first ODI) anything that was short from the quicks outside off stump, he was back and across and his head was behind the ball as he was playing the backfoot drives. Even on the front foot, he is getting in a better position to counter the ball moving away. He has made great inroads in his technique. I wouldn’t be surprised if Prithvi Shaw is in Team India’s T20 World Cup squad going to the UAE.”

On the other hand, ODI debutant Ishan Kishan too has impressed Hogg. He added that hitting the first ball for six showed the confidence and audacity he has in his own abilities.

The veteran further added: “Ishan Kishan wasn’t as impressive as Prithvi Shaw; he was dropped a couple of times. But I was impressed with one thing, he was willing to take a risk against right-arm off-spin. In the IPL, he has only got a strike rate of 90 against right-arm off-spin. It tends to hold him a little. He hit the first ball he faced in ODI cricket for six! Ishan Kishan did a big surprise there. He picked up length really well. If it was short, he was right back, if it was full, he was prepared to use those feet.”

Meanwhile, Suryakumar Yadav too has been in great form. Like Ishan Kishan, he also impressed with an unbeaten 31 off 20 in the first ODI against Sri Lanka and then a blistering fifty in the second as well and helped his side win.

According to Hogg, Suryakumar Yadav can bat anywhere and it is proof of how flexible Team India can be. He explained: “Was surprised with Suryakumar Yadav coming in at No. 5. But it is giving players different roles in different conditions. So, it is creating a little bit of adaptability in the batting line-up. That is one thing Rahul Dravid has ingrained in the youth. You don’t want to be a person batting at just one position. You have got to be adaptable.” 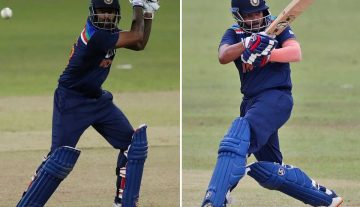