The Indian Test specialist, Cheteshwar Pujara added another feather on his already illustrious cap by surpassing a personal milestone of scoring 6,000 runs in the longest format of the game. He became the 11 Indian team batsman to surpass the landmark. Pujara achieved the milestone on the fifth and the final day of the third Test at Sydney Cricket Ground (SCG).

In the 76th over of India’s second innings, Pujara managed to score a boundary off Nathan Lyon and completed his 6,000 runs as well as his 27th half-century in Tests. Pujara and Rishabh Pant led India’s run-chase of 407 in the first two sessions on Monday and scored their respective fifties.

In the process, Pant became the youngest wicket-keeper (23 years and 95 days) to score fifty-plus runs in the fourth innings of a Test match in Australia. Previously the record was held by former Australian wicketkeeper Ian Healy who was 24 years and 216 days when he achieved the feat.

Rishabh Pant eventually got dismissed at the score of 97 runs after miscuing a shot off Nathan Lyon’s delivery, missing out on what would have been a well-deserved century. Pujara also fell soon after for 77 runs handing back Australia the advantage. While Pant missed out on what would have been one of the most memorable centuries of his career, he managed to garner a lot of praise for his fearless batting approach that made Australia toil in the field.

The explosive batsman earned a lot of respect for overcoming his injury and playing a superb knock in some of the most difficult circumstances, with the team pushed against the wall after an early wicket of Ajinkya Rahane on Day 5.

At end of the second session on Day 5, India was at 180/5 with Hanuma Vihari and Rishabh Pant batting in the middle. 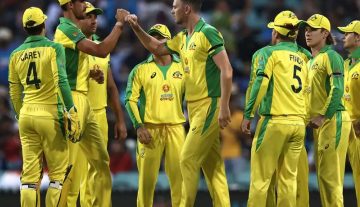