The Indian Test specialist, Cheteshwar Pujara loves batting in Australia but he got out on an unplayable delivery from much-talked-about fast bowler Michael Neser during India’s 2nd innings in the ongoing 3-day practice match against Australia A at the Drummoyne Oval in Sydney on Tuesday.

Pujara was dismissed for a duck after Michael Nesser managed to churn out a peach of a delivery and move just a bit away as the ball knocked the top of off-stump. Cheteshwar Pujara dropped his shoulders and looked baffled before he walked back to the dressing room after just facing 8 balls on Tuesday.

It was Pujara’s first competitive outing since the resumption of cricketing after the enforced break due to the novel coronavirus pandemic. He impressed in the first innings, he played a gritty knock of 54 as he stitched a 76-run stand with India A captain Ajinkya Rahane. More importantly, Pujara batted for 140 balls, reminding the Australians of the marathon he managed in the 2018-19 series.

Pujara was instrumental in helping India seal a historic 2-1 Test series victory in Australia in 2018-19 as he has batted for 1258 balls and spent 30 hours in the middle, scoring 521 runs in 4 Tests. All eyes will be on Pujara when India will be commencing the 4-match Test series with a day-night fixture in Adelaide on December 17.

There are some concerns for the visitors as young openers Shubman Gill and Prithvi Shaw failed to prove their worth in the 3-day practice game. While Gill managed to add 20 runs, Shaw hit 19 runs over 2 innings in Sydney. It was disappointing to see both the openers get out playing rash shots in the 2nd innings on Tuesday.

The two openers are in race for the 2nd opener’s position as Rohit Sharma is unlikely to be available for the first 2 Tests in Australia. While Mayank Agarwal is certain as an opener, it will be interesting to see who partners him in Adelaide as in-form KL Rahul is also in the reckoning.

India was in a spot of bother in the first practice match against Australia as they were reduced 119 for 5 by Australia A who also sealed a 59-run first innings lead, thanks to a terrific hundred by highly-rated all-rounder Cameroon Green. India skipper Rahane hit an unbeaten 117 in the first innings but he was dismissed by Neser for 28 on Tuesday. 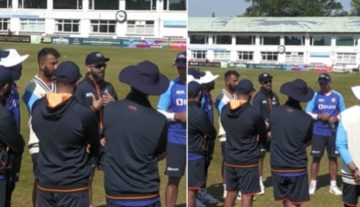 Videos
By CricShots - Jun 22, 2022
Virat Kohli Gave A Pep Talk To The Players Ahead Of Practice Game In Leicester