Uncategorized
Cheteshwar Pujara Smashes 22 Runs In An Over During A Royal London One Day Cup Match
By CricShots - Aug 13, 2022 1:53 pm
Views 680

India’s Test specialist, Cheteshwar Pujara stunned the cricketing world when he came out all guns blazing with his attacking avatar in the Royal London One Day Cup. Pujara, who is known for his rock-solid defense while playing for the Indian Test team, smacked 107 runs off just 79 balls, including a 22-run over on Friday.

Cheteshwar Pujara isn’t the sort of cricketer one associates with limited-overs cricket. As far as his international career goes, the veteran batter only plays the longest format of the game or the Indian Team. Even though he was a part of the Indian Premier League (IPL) in the 2021 season, Pujara didn’t feature in a single match for the Chennai Super Kings.

Here is the video of Cheteshwar Pujara 22 runs in an over:

TWENTY-TWO off the 47th over from @cheteshwar1. 🔥 pic.twitter.com/jbBOKpgiTI

Sussex then needed 20 needed off the last couple of overs. Warwickshire’s Oliver Hannon-Dalby then picked up the important wicket of Pujara off the first ball of the 49th over. Pujara’s dismissal derailed the chase for Sussex and the team was restricted to 306/7.

Despite valiant efforts from Cheteshwar Pujara, Sussex failed to win the match against Warwickshire. Had the Indian managed to stay at the crease for one more over, the result could’ve been different for Sussex.

With four points from three matches, Pujara’s team presently occupies the second spot in the tournament. As far as the tournament goes, Sussex are still in a promising position. Even in the county Champion, Cheteshwar Pujara was at his best for Sussex. 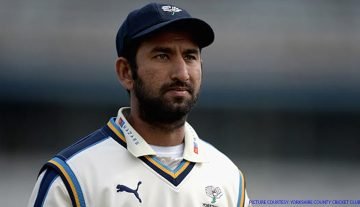