The veteran Indian batter, Cheteshwar Pujara has been on a roll in the ongoing County Championship 2022. The senior batter was dropped from the Indian Test squad for the two-match home series against Sri Lanka earlier this year due to underwhelming batting performances in the last year or so. He then had a forgettable Ranji Trophy personally by his own standards as Saurashtra failed to retain their title as they were ruled out of the group stages.

However, Pujara’s move to make himself available for the entire County season has done wonders from him so far. Lately, the Gujarat cricketer showed a fearless intent while taking on one of the best modern-day fast bowlers in world cricket, Shaheen Afridi. The incident took place during the ongoing game between Sussex and Middlesex.

In the second innings, Sussex was reduced to 6/2 with Shaheen Afridi getting the wicket of opener Ali Orr for a duck with the new ball in hand. On the third delivery of the third over, the tall speedster came charging in at the seasoned red-ball batter and bowled a short delivery way outside the off-stump in order to deceive him. Nonetheless, Cheteshwar Pujara counter-attacked with an uppercut as the ball flew way over the off-side boundary and landed in the stands for a six.

Here is the video of the six from Cheteshwar Pujara:

Shaheen vs PUJARA 😳
That six from Pujara 🔥 pic.twitter.com/twm1i2PRR4

Cheteshwar Pujara had scored 16 runs in the first innings. As far as the status of the second innings is concerned, he along with Tom Alsop have put on an unbeaten 138-run stand for the third wicket. While Alsop got out after scoring 66, Pujara remained unbeaten on 125 as Sussex have taken their lead to 270 runs.

Cheteshwar Pujara had come into this contest being in outstanding form having amassed 531 runs in five innings at an impressive average of 132.75. This includes a couple of double centuries and a century in three matches. The Test specialist would be hoping to come up with yet another spectacular performance as Sussex eye their first win of this season. 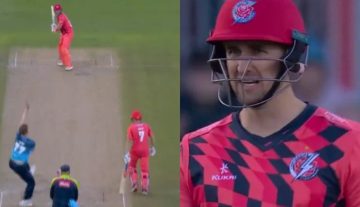 Videos
By CricShots - May 28, 2022
Liam Livingstone Smashes The Ball Out Of Old Trafford In T20 Blast Game