Kings XI Punjab (KXIP) has finally received some good news when their star opener, Chris Gayle was announced free from a stomach infection. He was admitted to the hospital and had to miss the last couple of matches when he was actually being considered to include in the playing XI. Gayle will be expected to play his first game this season against the Royal Challengers Bangalore (RCB) in KXIP’s next game.

The KL Rahul-led side has only managed to win a single game out of the seven matches they have played so far. They are languishing at the bottom of the points table and need to win consistent games from no in order to stand a chance to qualify for the playoffs. They should’ve registered their second win against KKR a few days ago only to lose control of the match in the last three overs.

Coming back to Chris Gayle, the news of him recovering from the stomach infection was confirmed by the KXIP franchise on its official website. Describing the same, a report read: “In an exciting development that is sure to delight Kings XI Punjab fans all over the world, the star opening batsman Chris Gayle is back on the training ground, having recovered from his stomach bug.”

I can tell you this!!! I will never go down without a fight!! I Am The #UniverseBoss – That will never changed!! You can learn from me…but its not everything I do you should follow!! Don’t forget my style and flare too!! #LivingDiLife #Always 🇯🇲 Thanks for all your concerns peeps, much appreciated ✊🏿❤️🙏🏿 (I really was on a phone call) 😄

However, the franchise is yet to clarify whether Chris Gayle will play the next game against RCB in Sharjah or not. However, one would feel it is a perfect game and venue for the Universe Boss to make his first appearance in the ongoing season. Also, being an overseas player, Gayle can be expected to Glenn Maxwell in the line-up who has been failing to prove his worth in this season so far.

If Chris Gayle makes it to the playing XI, either KL Rahul or Mayank Agarwal will have to bat at three. So far KXIP’s opening duo has done a pretty good job. Both Rahul and Agarwal are at the top two positions in the race for Orange Cap with 387 and 337 runs to their name respectively. 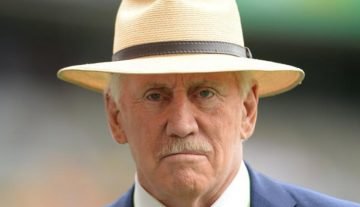 Article
By CricShotsStaff - May 23, 2020
Ian Chappell Feels IPL Shouldn’t be Preferred by the Australians