The Board of Control for Cricket in India (BCCI)’s acting president CK Khanna praised the Committee of Administrators (CoA)’s decision to call the opening ceremony of IPL off and donating that money to Pulwama martyr’s families. The Indian Premier League 2019 is scheduled to kick off from March 23 in Chennai and it will be the first occasion when the league will begin without an opening ceremony.

“We will not have any inaugural function for the IPL and the money budgeted for that goes to the martyrs’ families,” said the CoA chairman Vinod Rai.

Khanna lauded the CoA’s decision and said that although the board can’t end their pain, he is proud that the Indian cricket board is contributing. “I welcome the decision taken by the COA that the IPL opening ceremony has been canceled and all the allotted money will be given to the families of the martyrs,” Khanna told ANI.

“We cannot end their pain but I am proud that BCCI is contributing. We are with the country, its soldiers and people,” he added.

While the CoA took no decision regarding the boycotting the India versus Pakistan game in the 2019 ICC Cricket World Cup, it urged ICC to “sever ties with countries from which terrorism emanates”.

Also Read: Delhi Capitals launched their jersey ahead of IPL 2019

In one of the most deadly terrorist attack in Jammu and Kashmir in the last three decades, the Indian army lost 44 CRPF troops on February 14 in J&K district Pulwama. The terrorist organization Jaish-e-Mohammad claimed the full responsibility of this attack, which is based in Pakistan. Hence, the Indian government is in the mood the isolate Pakistan.

The Indian civilians are raising the voice to boycott India vs Pakistan clash at the upcoming World Cup and avoid facing them even in the multi-nation tournaments. The bilateral ties between both countries have been interrupted since the 26/11 attack in Mumbai. However, India-Pakistan once played a short limited-overs series in December 2012, which stands to be the last series between both countries as of now. 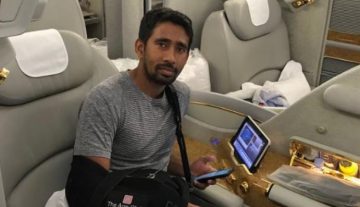 News
By CricShots - Nov 9, 2019
Wriddhiman Saha Reveals The Truth About His Injury